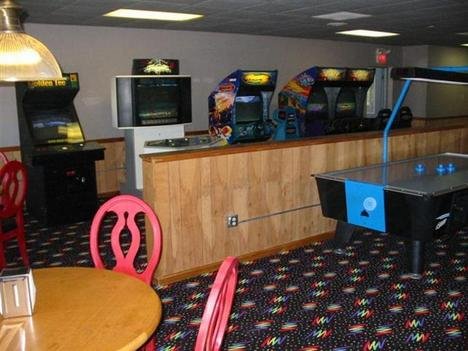 What ever happened to the arcade scene here in America? I wasn’t really aware of arcades until I was 12 or 13, and actually got into playing Time Crisis and Metal Slug. Yet for me, these games have existed only in the movie theatre or in small arcades in the mall. If you ever look at footage of Japanese arcades, they are lively, loud, and a hell of a lot more fun than American arcades. So, why is it that there is a scarcity of good arcades here in America? Or is it just me, and there are a myriad of arcades outside of New Jersey that are filled with games and interactivity between patrons?

At the Carousel Center in Syracuse, there’s an actual arcade there that I stop by from time to time. There are occasionally a group of friends hanging out around the DDR machine and playing. If I head further into the arcade, I’ll notice a dad playing air hockey with his child or maybe doing a racing game with them. I might run into an old man on the Soul Caliber II machine, or a pair of friends playing a Street Fighter game. The thing is, no one really talks to each other there. When I walk into the arcade, the employees there seem bitter and disinterested in everything, and so I end up going straight to a light gun game, as I am a total whore for those. I’ll play a round or two, wander around for a minute, and then leave. I’m not alone, either. JorgeFurrioso recounts: “I remember when I was a kid I used to go a lot, because I enjoyed getting everyones attention as I kicked their butt in Street Fighter or Soul Caliber. But just as they had popped up, they vanished before my eyes around here. And I don’t know why. recently I went to an arcade, and it was a different experience. I went alone, and its just kinda lonely, because no one interacts. It almost like that parallel play stuff. I walked in, played some DDR, and then some others, (a mix between fighters and light gun games. Which is ALL you can find anymore!), and really the whole feeling left me unsatisfied. I felt like I could have just walked into my room, brought up an emulator and gotten the same result, but without spending money on it.”

Why is it that this is all that happens when I go to an arcade? For one thing, I think the price is a big factor. In order to play games that are $0.25, I have to head to the back of the arcade, and find games that are either piss-poor, or otherwise only available on the original Playstation. Otherwise, fighters will cost me $0.50 or $0.75, and light gun games are never cheaper than $1.00. Platformers like Teenage Mutant Ninja Turtles 4 or X-Men? Forget it, those are relics of old now, relegated to eBay and classic game events. The prices are too high for me to keep pumping quarters into the machines, because if I have to spend half of a $5 bill on two rounds of a game, I’m going to be stopping very quickly. I don’t quite know the costs of running an arcade, but costs are prohibitively high for patrons, and that seems to be one of the biggest turnoffs.

Another problem with the arcades is that there’s a horrific selection of games nowadays. Some iteration of Street Fighter is there, along with two Time Crisis games, followed by DDR, and then a slew of bad light gun games, several driving games, and whatever else the arcade needs to fill space. Seriously, where are the Guilty Gear arcade machines? Where are my platformers? Where is my Metal Slug? It seems that they are all gone. I look at Japanese arcades, and I am green with envy. I would love to walk into an arcade and see a copy of Taiko Drum Master standing there for me to play. Arcades are lacking two things: variety and good games. If arcades can put out more machines that people want to play, then they’ll attract more customers. If there were several fighting games placed prominently in the arcade, then you can have it where people would gather around the machine to watch people play. That, combined with more games that require co-operative play, would help out immensely.

That leads me to another point, actually. I’ve never been to a friendly arcade in the past 5 years. The employees are either disgruntled teens or nearly catatonic octogenarians. Many times, the other people there are drunk college students or prepubescent children, none of which want to play against me in Marvel vs. Capcom 2. Arcades need to make more of an effort to bring in gamers, such as by holding more tournaments or holding all-night game-ins. I’d love to hang out at the arcade for hours on end, but at this point, it’s just not worth it. Perhaps in the future, there will be an arcade revolution that will sweep the nation, and create a place where I can burn through all the money in my pocket. Or I can just go back to dreaming while waiting for CES.

Destructoid readers: please comment or email me the locations of noteworthy arcades that rock as much as possible.

Not to be outdone, reader El Moco sent in his personal account of what it’s like in arcades in Mexico. It seems that for him, arcades are few and far between, and the machines are old cabinets loaded up with a bunch of old games, and only costing him 2 pesos. Check out the shots in the gallery, or check out his page for a little bit more.

Filed under... #Arcade#Does it suck?