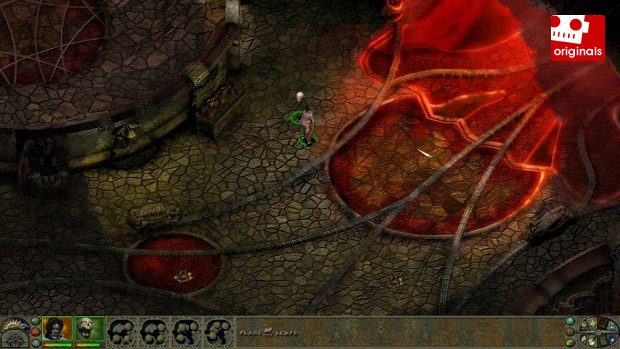 We’re introducing a new regular feature here on Dtoid for all of you PC gamers. The Weekend Modder’s Guide will take a game, usually an older one, and show you how to breathe new life into it. PC gaming has a strong legacy of great games, and unlike consoles you can usually run older software on your new PC. Unfortunately, time has not been kind to a lot of games.

We used to play them at 640×480 with no problem, but now that will make us cringe. Thankfully, good PC titles have a lot of dedicated fans who are willing to keep updating them long after the developers stop. Fan-made patches can add widescreen, add HD textures, fix bugs, finish content that wasn’t included originally, and they can even add brand new content.

Planescape: Torment is one of the best RPGs ever made. It focuses on its story — one that is witty, funny, deep, and engaging — and pulls this off well. Black Isle wanted to make an RPG where death didn’t stop the game; it’s actually part of your character’s story to die over and over again. You have the power to resurrect your party too, so you never have to worry about being penalized for dying. This doesn’t mean that the game is easy, though.

Since Planescape‘s graphics are hand drawn, they don’t suffer from the aging of a 3D game made in the same era. In fact, once you increase the resolution and do some tweaks to speed things up, it looks really good. The animations are smooth and detailed, and all the environments are fleshed out and stylized. I’m going to show you how to install all of the mods you need to play this fantastic game in HD.

You can grab Planescape: Torment from GOG.com for $9.99, and it includes a whole bunch of extra goodies like the soundtrack, wallpapers, and a collection of artwork. Even if you have the discs lying around somewhere, I really suggest that you just grab it off of GOG.com since they handle much of the back-end tweaking. You can still use this guide for a different version of the game, but you would have to do a bunch of extra steps to make it work correctly.

Planescape: Torment was localized for Poland by CD Project, who later went on to make The Witcher.

The game’s dialog script is over 800,000 words long, which is about the same length as The Lord of the Rings plus A Game of Thrones.

The game was designed by Chris Avellone, who was also designing Fallout 2 at the time. He later went on to work on the Icewind Dale games, Baldur’s Gate: Dark Alliance, Champions of Norrath, Star Wars: Knights of the Old Republic II, Neverwinter Nights 2, Alpha Protocol, and Fallout: New Vegas.

The voice actors include Jennifer Hale (female Commander Shepherd from Mass Effect), Michael T. Weiss (Tarzan, from the Disney animated Tarzan television series), Keith David (Commander Anderson from Mass Effect) and John de Lancie (Q from Star Trek: The Next Generation). The rest of the cast have done voice acting for Marvel, DC, Disney, Pixar, and plenty of other videogames.

All right, let’s get down to business!

Time: 1-2 hours
Difficulty: Intermediate
What you need: A copy of Planescape: Torment (preferably from GOG.com)

1. Install Planescape: Torment, but not to the normal Windows program directory. This will help avoid issues with the widescreen mods in Windows 7 or Windows Vista. Just make a folder in the C: drive called “RPGs” or something to that effect.

2. Install the Gibberlings 3 widescreen mod. You can set this to whatever resolution that you want. I recommend that you don’t go too high, or everything in the game will be very tiny. I used 1366×768 and it looks good. Get this mod here.

3. Install Ghost Dog’s UI. This will center all of the UI, fill in black spaces with existing artwork, fix loading screens, and just generally make everything work at higher resolutions. Grab it here.

4. Install Quinn’s Unfinished Business, Fix Pack, and Tweaks. This fixes spelling and grammar issues, bugs, allows you to hear all of your parties banter over the course of the game, and adds back some content that was unfinished and cut from the game. Just install all of the recommended files. You can read the instructions here.

5. Look in the directory that you installed the game to for a file called “torment.ini”. Open it up and notepad and change the following: path search nodes=32000 Maximum frame rate=40 This will help characters move around better, and it will make sure that the animation speed is fluid without being too fast.

6. Download and install the DirectX SDK. Once the installation is finished launch the DirectX control panel. Go to the Direct Draw tab and disable hardware acceleration. This will help with slow frame rates and control lag. You can download it here.

7. Launch the game and from the graphics option menu, change all the setting to software rendering — this will help speed things up and reduce lag.

That’s it! You should be all set to play Planescape: Torment in glorious HD!

(edit: if you are having lag issues, try downloading and installing DDraw Fix.)