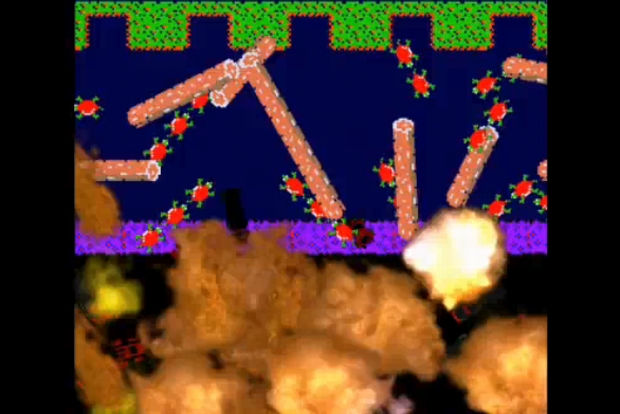 [Weekend Destructainment is a collection of funny videos brought together from all across the Internet to bring you entertainment on these slow and boring weekends.]

GagFilms latest video pits Grand Theft Auto against Frogger. The winner, just like the other mashups, is pretty obvious.

After the break, it’s Mega64 vs Rooster Teeth. Next, watch the intro to a cartoon inspired by Adventure Island. Followed by the Dr. Mario theme with lyrics. Then it’s Call of Duty: Secret Spielberg level. Next up, Katie Curic plays Mad Dog McCree.

Two Street Fighter rap videos follow that. Next, watch someone play Rock Band with a flute. The Destructainment ends with a Raichu proposing to a Pikachu.

Mega64 vs Rooster Teeth at PAX.

The intro to Honey the Bug, a Japanese cartoon based on Adventure Island. The cartoon later got it’s own game. Spotted on GoNintendo.

Dr. Mario with lyrics. Another Brentalfloss jam. Also, the crabs part was the best part.

Playing Rock Band with a flute.

Guy dressed as a Raichu proposes to a girl dressed as Pikachu. Bonus: The engagement ring is inside a Pokeball. Spotted on GoNintendo.