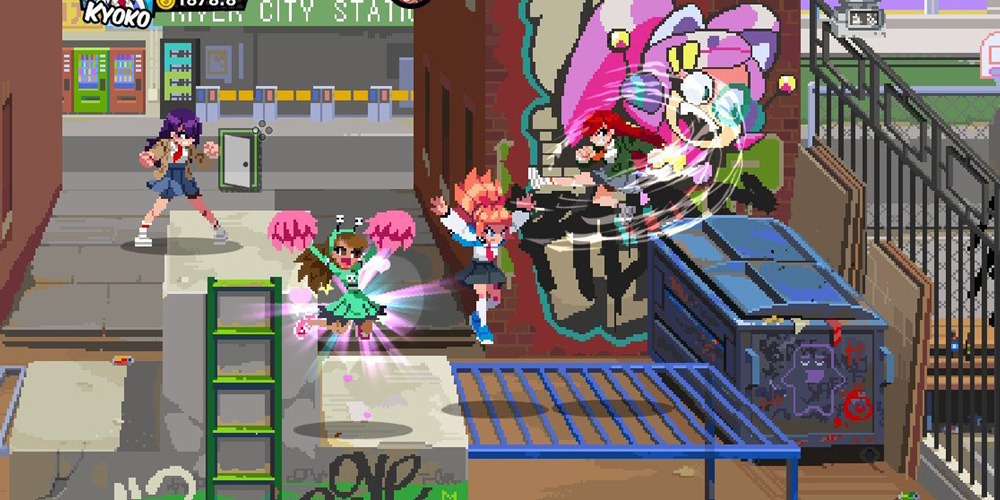 River City Girls was announced earlier this year, then few months later, it was out in the wild. That didn’t leave WayForward much time to build hype, but their short-but-sweet marketing strategy seems to have worked. Since its release last week, the game has been the talk of the town, leading to top notch fan art, glowing reviews, and tons of praise on social media.

Getting the game made, on the other hand, took a lot longer, but not as long as I had guessed. In an interview on NF Magazine’s YouTube channel, lead director Adam Tierney and co-director Bannon Rudis told me that the initial proposal for River City Girls was drafted around three years ago. After hearing about one of the few games in the Kunio-Kun series where you can play as both boys and girls, Adam got together with Bannon and character designer Rem on a pitch for Arc System’s Works, holder of the River City/Double Dragon/Kunio-Kun license. Actual development of the game didn’t start until about two years after that, meaning that the actual dev time was about 12 months. That’s incredible, given how beautiful it turned out.

Bannon seemed particularly relieved, and amazed, that things went as well as they did. It took him years of working day and night to create the art for River City Ransom: Underground, consisting of an estimated +100,000 individual frames of animation. By comparison, his time in the art trenches on River City Girls was a relative breeze. He did animations that he felt were “below” the required skill set of the lead animators, like the ocean waves crashing on the shore, and trusted his team to do the rest.

That was just the tip of the iceberg of all the substantive chatter we had. A few other highlights include talk of a scrapped first-person “revive your friend slap mode,” the origins of some of the cameos from Combatribes and other obscure Technos games, and word that many of the game’s animations were first tested for viability in MUGEN.

That last bit really got my wheels turning. If River City Girls is a hit, could a River City 2D fighter be next in the cards? According to Adam, WayForward has an amazing relationship with Arc (I think at one point he even said that he feels like Arc is the Japanese brother to WayForward) and that they are already talking about the possibilities of working together again. Both sides of the equation have plenty of ideas for what they could do next, so there’s no telling where their partnership might go.

One thing’s for sure though, if you’re in LA and you want a little piece of River City history in your pocket, and your belly, you should head over to Little Tokyo ASAP. The Okamoto Kitchen is serving up food from the game, including Merv Burgers and Fries, until 6pm, but just for today. Customers get free stickers, and the directors of the game are planning on hanging out there too. Maybe you can ask them some of the questions I missed.