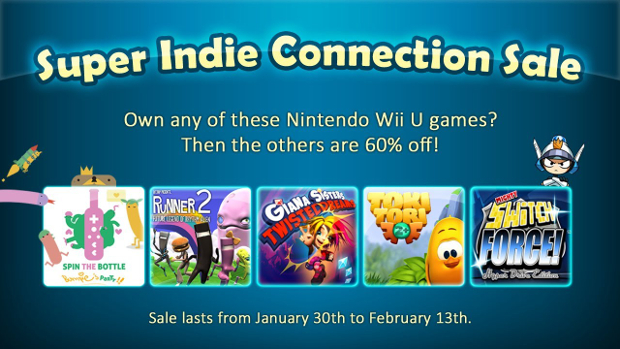 Nintendo recently announced plans to reward consumers who buy games on their consoles by making future purchases less expensive for them. Like a lot of the stuff they announced at that big press conference, it’s actually something they’ve been doing for a while, but not too many people had been talking about it.

I hope that’s not the case with the current “Super Indie Connection Sale” on the Wii U eShop. If you own Giana Sisters: Twisted Dreams, Bit.Trip Presents Runner 2, Mighty Switch Force! Hyper Drive Edition, Toki Tori 2+, or Spin the Bottle: Bumpie’s Party over the next week and a half, you can get any of the other games for 60% off. It’s one of the best deals going on consoles right now.

Out of all the games on that list, Spin the Bottle: Bumpie’s Party is probably the least well known, likely because it’s similar to Johann Sebastian Joust. You really have to play to understand the appeal. While I’m not 100% that this video from WayForward will do much to change that, it’s nice to see them take the time to give the game a public vote of confidence. Maybe that will help it find its audience.