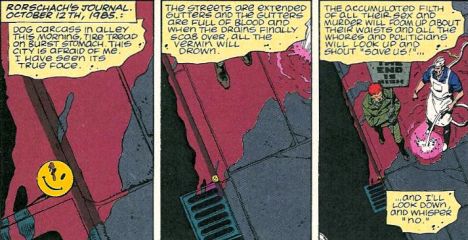 Anyone who has read Watchmen and seen 300 knows that Zack Snyder’s upcoming film adaptation of Alan Moore’s greatest graphic novel is going to suck. Nearly very single scene in the trailer is needlessly in slow-motion, Nite Owl and Silk Spectre are about ten years too young and way too slim, and 300 sucked balls anyway.

To be developed by Deadline Games (creators of Total Overdose and Faith and .45) and released on PC, PSN, and XBLA, two downloadable episodes will be released: one coinciding with the film’s theatrical release, one with the DVD release.

Given Deadlines’ track record, I cannot imagine the Watchmen episodes will be anything but infuriatingly disrespectful to the source material. The graphic novel had less than ten “action” scenes total: are they going to superficially expand moments from the graphic novel and have player set a hundred cops on fire as Rorschach, rather than five or six? Or will they go the route of The Warriors, and focus on a time period the graphic novel doesn’t cover?

Either way, Watchmen can’t work as a movie, and it certainly can’t work as a cash-in action videogame. Given how (rightfully) pissed off Alan Moore is at Snyder’s upcoming film adaptation, one can only imagine he’s getting ready to strangle someone with his beard after hearing this news.

But then again, maybe I’m being too harsh: do you think it could work?