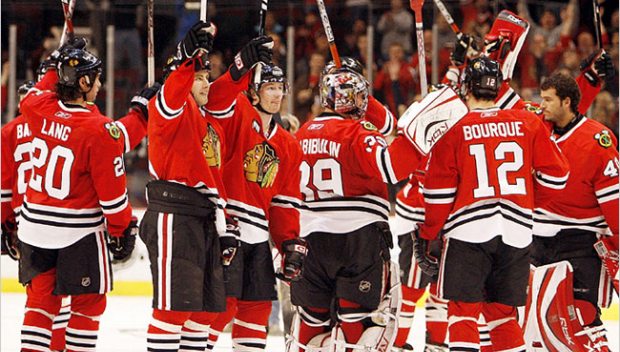 Hockey is a game dominated by men who routinely lose teeth and get checked into the air with razor sharp skates on. It’s a manly sport full of manly things. So what videogame do the manly men of hockey play to stay so manly? Mario Kart. There’s some spit in your eye, Blur.

Above you can see video proof of the Blackhawks, who are only one game away from the Stanley Cup finals, playing a crap ton of Mario Kart Wii while on the road for the playoffs. They’re surprisingly adept at it, though there didn’t seem to be much blue spark action going on. The first guy to figure that out is going to start to dominate their informal league.

Knowing how immensely superstitious teams are in the NHL, I think it’s a safe bet to say that if the Blackhawks win the cup they may be seeing rounds of Mario Kart on their practice schedule from now on.