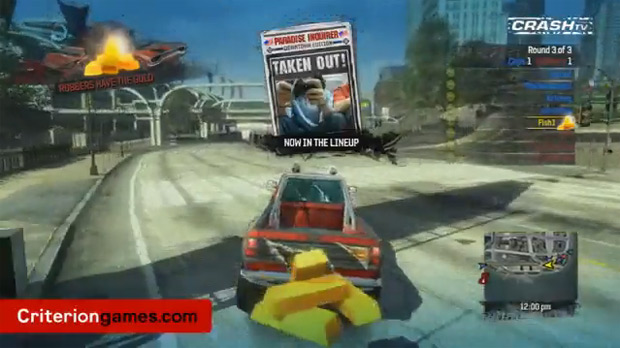 After a few weeks of showing literally everything about the Burnout Paradise “Cops and Robbers Pack” without actually revealing exactly how the new mode would play, Criterion has answered our cries for gameplay footage.

The boys are back to their usual antics of goofing off while simultaneously demoing the latest addition to Paradise City in episode 31 of Crash TV, which can be found post-jump

In Cops and Robbers, the robbers and the PCPD compete to bring a stack of gold bricks back to their hideout. If someone has the pile of gold, you simply need to take them down to grab the loot for yourself. The best part, by far, is the fact that the gold itself is physically visible and hugs the rear bumper of whoever currently has it in their possession.

I can only hope this DLC isn’t too costly, because it looks to be an absolute blast.