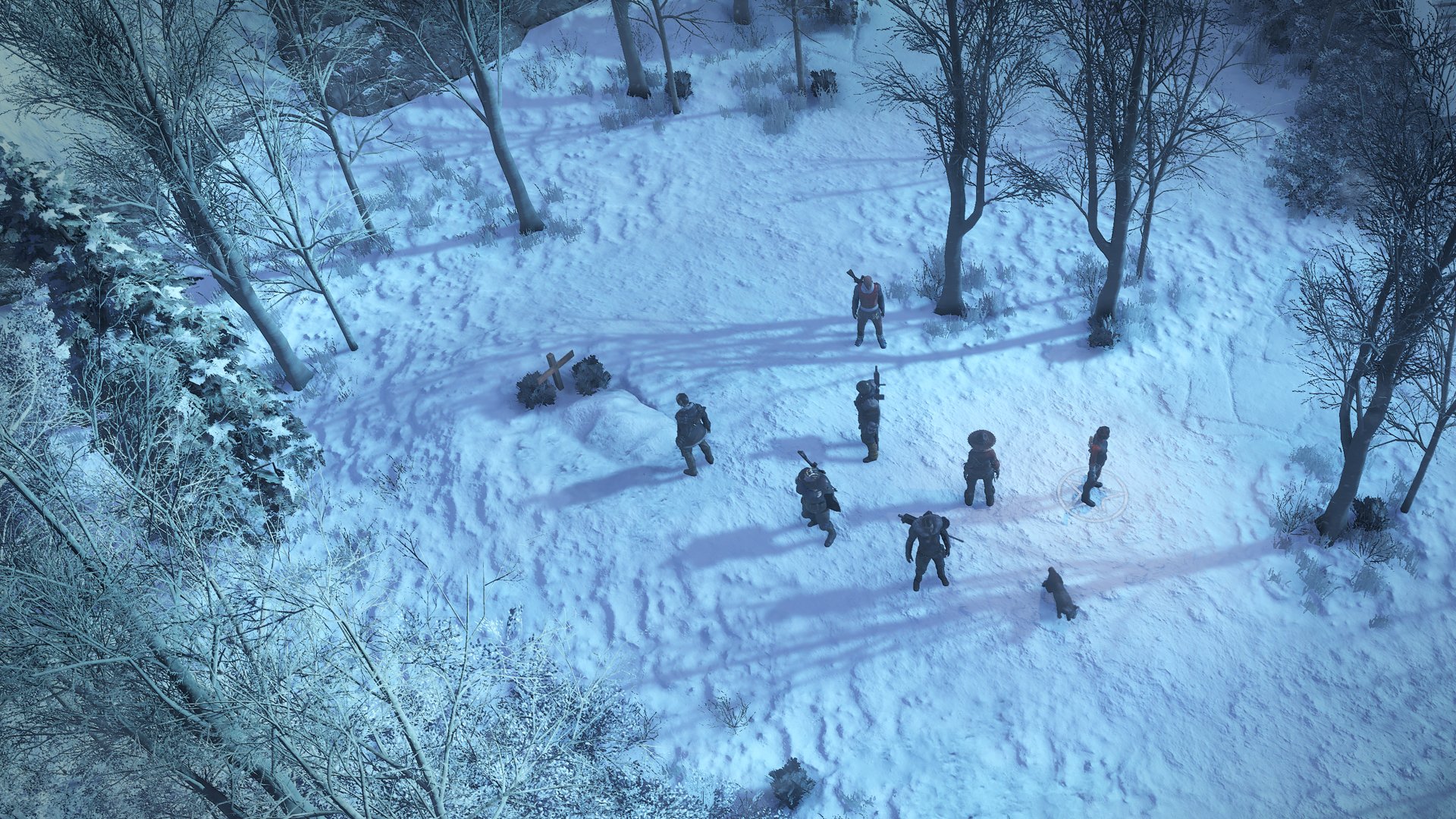 Man, I remember when Wasteland 2 hit Kickstarter, I was so excited. Not because I had a nostalgic familiarity with the series, but because I am just so in love with traditional RPGs in that vein. I wanted to support that style of game in hopes that more and more could be made. And look what happened! Now we have Wasteland 3, alongside the likes of Disco Elysium, Pathfinder, and a new Baldur’s Gate.

I like to think that it’s all because of my backer pledge to Wasteland 2, even though the game itself didn’t grab me and I dipped after only a handful of hours of gameplay. The important thing is, you’re welcome.

Now, I’ve not been to Colorado, but according to Wasteland 3, it is a frozen wasteland. From what I understand about the type of runners who come out of Boulder and the like, I guess that makes sense.

It is a stark contrast to the desert plains that someone might expect from a game called “Wasteland,” but it takes on the appropriate atmosphere regardless. We are over a century out from the nuclear destruction of Earth, and the game takes no time ensuring that the player understands that everything is in a real bad state. Warring factions compete for land as justice and lawlessness battle it out on a daily basis. And for those who have no idea what happened in Wasteland 2, or even the first game: no worries, nothing really seems to matter here.

The writing is what has always elevated these games for many players, myself included, and the few hours I was able to play of Wasteland 3 made it clear that this is still a top priority. Unfortunately, this wasn’t enough time to really get to know the characters very well, but first impressions are exciting and some of the situations that this preview build led me through were surprising to say the least. It also helps that everything is fully voiced — an incredible feat that I have not come to expect in games as large as Wasteland.

The player’s squad can grow up to six characters, four of which can be mercenaries or custom-made (the final two slots are reserved for recruitable NPC characters). Each come with their own set of skills, perks, and attributes that the player can distribute points into as they level up. None of this is particularly new, and the perks and abilities seemed pretty standard in the very early stages of the game.

As with any RPG of this type, there are a ton of things to do. There are animals walking around so, guess what? Someone might have the Animal Whisperer perk and be able to talk to them. Know what else there is a lot of? Machinery. And computers. Maaaaybe there are some characters that can repair and hack things? You never know! Except you do, because these games have been doing this forever.

I’m not knocking on the game — this is what is expected and this is what has been delivered. The joy is creating a party that takes advantage of the things that each individual player likes. Some players want a soiree of sneaky snipers, others want a bumbling bunch of brutes, and others simply want all of the above. The good news is that when clicking on an object in the world, the character who can deal with it best automatically walks over to interact. It was unclear to me as to whether or not this also applies in conversations, i.e. if the “persuasion” checks are made against the highest level in the party or the person who initiated the conversation (I’m inclined to think the former, based on what I experienced).

Turn-based combat punctuates many of the encounters (sorry, you can’t talk your way through this game) and feels…okay. There are a lot of options and some clever tactics to employ, but I think I’m starting to get tired of the “48% chance to hit when I’m literally in someone’s face” debacle. I get it, guns are effective at different ranges BUT THE GUY IS LITERALLY RIGHT ON TOP OF ME. I think I can shoot him pretty good. The same goes for the ever-frustrating miss on the 95% chance. There’s just nothing more debilitating.

The game doesn’t release for another two months, which is good news because there is plenty of jank to be ironed out in that time, including weird AI decisions. The game never quite ran at 60 frames per second, but my PC is aging at this point so I’m not quick to point fingers. It actually ran terribly at first, until I realized I was running [email protected] in the background, so don’t do that while playing Wasteland 3.

My favorite twist on the combat deals with the leftover Action Points (AP) that characters have at the end of their turn. Instead of moving, say, three tiles simply because the AP is there, players can “bank” it in a variety of ways. Using AP to ambush enemies works similar to the “Overwatch” mechanic in X-Com: the character will shoot at enemies that come by during their turn. Players can also turn excess AP into extra defense, or bank it and carry it over to the next turn. This small but strategic decision makes each character’s turn that much more interesting and I love the mechanic.

Finally, while the visuals are…there, the music is absolutely fantastic. Multiple times I simply stopped what I was doing so that no sound effects would get in the way of the score itself. Basically what I’m saying is: if you plan to buy Wasteland 3 and they offer a bundle with the soundtrack, get it. Don’t even think twice. For example, a battle erupts and “Down In the Valley to Pray” starts playing, but it’s not the original, oh no, it is transformed into a country-rock battle hymn that freaking slaps. It’s so good. I have it on right now in the background.

I don’t think Wasteland 3 is the game to get people into the genre. If the original Fallout games or the previous Wasteland titles didn’t tickle your fancy — this is more of the same. I also hesitate to call this a highly refined entry into the genre. It’s more of just exactly what you would expect. The early hours promise some fantastic writing, an amazing soundtrack, and tactical combat that will have you missing while point-blank in someone’s face. For some, that’s enough to get extremely excited (this did surpass its crowdfunding expectations), and for others, it’ll be a hard pass.

[This preview is based on a retail build of the game provided by the publisher.]