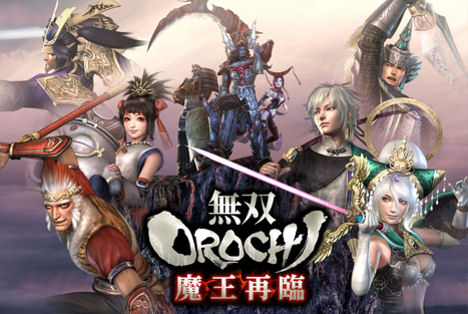 At the MCM London Expo, Koei was on hand to demo Warriors Orochi 2: Rebirth of the Demon Lord. As Destructoid’s underdog Koei following will likely be aware, Warriors Orochi 2 is shaping up to be the most comprehensive Warriors title yet, with an insane amount of playable characters and content.

Arguably the biggest selling point of Warriors Orochi 2 is the selection of brand new faces introduced from outside of the traditional Sanguo/Sengoku period settings. I got my grubby mitts on Warriors Orochi 2 to try out these new characters and share the fruits of my labor for those who care. Those who don’t care, ready the comment boxes to expend your effort in telling me how little you care.

Hit the jump as we discuss the all-original playable characters in Warriors Orochi 2.

[Images courtesy of Koei Warriors, and it was a pleasure to meet KW’s very own Insp. Chin at the Expo once again, as it was the fine folks at Koei and the Podcastle fans who happened to say O HAI. Much love to all]

Taigong Wang was the first brand new character revealed along with Taira no Kiyomori (excluding Fu Xi and Nu Wa, who play like their DW3/DW4 counterparts) and is a semi-mythological character of Chinese lore. In keeping with typical Warriors wackiness, Taigong believes a fishing rod is a perfectly acceptable weapon, and he’s not far wrong.

Taigong plays like a Dynasty Warriors character more than a Samurai Warriors character, with a charge rush and less charge moves overall. His fishing rod seems to have giant lures with which he can smash into the ground, and leave rather pretty yin/yang symbols all over the battlefield. Of particular interest is his ability to nab a group of enemies with the rod and cast them. What else are you going to do with a fishing rod of DEATH?

This Japanese general is a bit of a wanker, his mission being to resurrect Orochi and ruin everyone’s day. He is also, quite simply, a beast. Fighting with a seemingly infinite amount of gigantic rosaries (since one move sees him snap it to pieces, only to pull out another), his attacks are incredibly powerful and effective. His musou attack has the rosary’s beads fly all around him, battering everyone to death while he casually walks through the crowds with his arms folded.

He’s not the fastest character, and one move even had him become short of breath and stop fighting for a moment, but I can can see Taira becoming a favorite among fans for his raw killeverythingability, which is a word I made up.

Did you know that in ancient Japan, samurai warriors had lightsabers grafted onto their arms? I was completely ignorant of this fact until Warriors Orochi 2 introduced me to Minamoto no Yoshitsune who shows off his Jedi skills.

Yoshitsune has a variety of swift attacks that fit the Samurai Warriors mold, and uses electrical energy from his saber to do the job … the job of T for Teen rated murder. My favorite attack of his is the “stab a guy, lift him up and fry him with a charge of electricity” routine.

is based on the Romance of the Three Kingdoms historical novel, but Sun Wukong appears courtesy of another famous piece of Chinese literature, Journey to the West. He is the monkey king (born of a stone egg, in case you didn’t know) and is easily the fastest character of the franchise. Rather than walking, Wukong gets around the battlefield on his famous cloud Nimbus, which lets him glide from enemy to enemy with an obscene amount of speed.

This swiftness carries over into his attacks, as the Monkey King tosses his “Mr. Whacky” (seriously) around relentlessly. His moveset is a lot of fun, especially the attack that sees him hopping around the enemy, leaving ghostly imprints of himself in his wake. The only problem with Wukong is that he is so fast he can be a little hard to control, especially when timing for charge attacks. Definitely one of the most interesting characters, though.

When Himiko was first announced, I must confess that I wasn’t too interested, but having finally played with her, I can confirm that she is the most sickeningly adorable Warrior ever created. Himiko doesn’t actually attack directly — she is accompanied by two floating stone idols that shoot lasers while she directs their actions — and it’s the cutest thing you ever saw.

Himiko skips around in a darling fashion while the two statues above her deal out death. Just watching his bounce up and down childishly as energy blasts rain upon enemies is both incredibly badass and totally endearing. She melt hearts and faces at the same time.

And that’s the newbies for you. I saw nothing of Shin Orochi and sadly didn’t have time to check out the versus mode (or the giant boar within) but hopefully this rundown of all the totally original single player characters is of use to those interested in Warriors Orochi 2. With these awesome new generals, as well as different play modes and a selection of single player campaigns that boast an Orochi story, this is shaping up to be potentially the greatest Warriors game ever, and I for one am looking forward to it.

Tune in to this coming week’s episode of The Podcastle where I will have the full details of the MCM Expo.