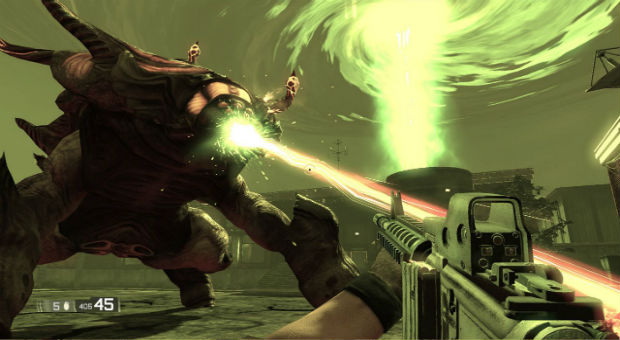 Alien invasion/’Merica yee-haw sim and first-person shooter Blacksite: Area 51 could be due for a reboot, if a new trademark filed by Warner Bros. Entertainment pans out. The basic Intent-to-Use trademark was submitted this past Wednesday and entered the Trademark Reporting and Monitoring System this weekend on April 26, but it’s unclear as to what it may actually have been submitted for.

After acquiring Midway Games back in 2009, Warner Bros. scooped up a good portion of their assets as well, leaving Blacksite: Area 51 in limbo. The original trademark still belongs to Midway Games, so it’s curious as to what might spring up from this new development — it could end up being a Steam release, a new entry in the series, or (my hope) a reboot.

Given the many times I walked past that game in the store and opted not to buy it before picking it up at Walmart for five bucks and being pleasantly surprised by how much goofy fun it was, another go-around for Blacksite might be a good move in the hands of someone new. I’m down for some silliness if it’s done correctly.