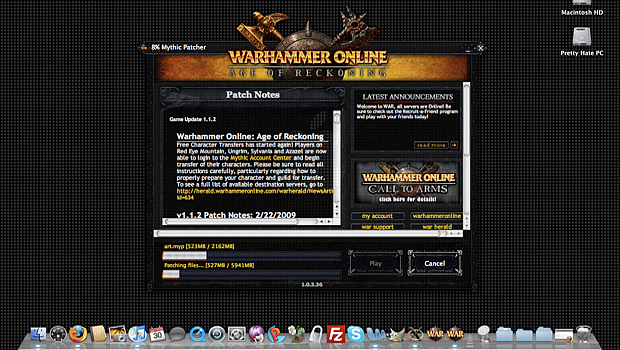 In the middle of our rousing office-wide almost daily Macintosh versus PC debate, we received the following information: Mythic Entertainment’s Warhammer Online was ported to the Macintosh platform. It’s like the gods knew we were buzzing about the new Macbook Pros.

Starting now, both grizzled and new players can download a Mac-specific beta client for the low, low price of free from WAR’s official Web site. Anyone willing to leap platforms will receive “an exclusive title and trophy award.” Consider that icing on the superior-platform-cake. Zing!

The Macintosh version of WAR — made possible by TransGaming‘s Cider Portability Engine — is slated for official release in the fall. We’re currently downloading the latest patches and such on our full beta version, but we’ll get you a report of how WAR is running on the Macintosh in the near future.