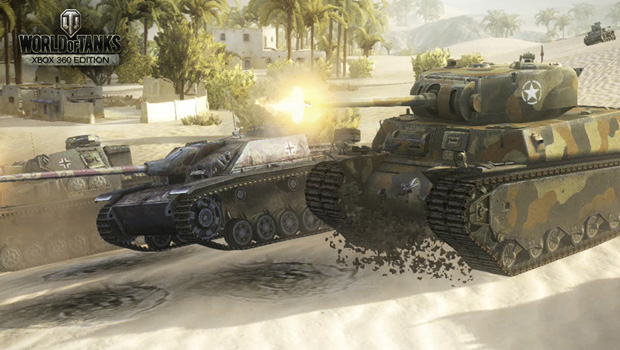 A familiar site at every E3 for the past few years has been a giant tank sitting just outside West Hall of the LA Convention Center. Wargaming has been constantly promoting its free-to-play tank shooter World of Tanks, and the strategy has paid off big time.

As Wargaming CEO Victor Kislyi explained to me, the entire Wargaming staff numbered only 60 people four and a half years ago. Jump to today, Wargaming is 1000+ employees strong, spread across 15 headquarters throughout the world, and with a World of Tanks user base of roughly 60 million! Kislyi pointed out that, according to the Harvard Business Review, doubling the size of your company on a yearly basis is typically not a good thing. He is happy to demonstrate that Wargaming has been doing exactly what others say it shouldn’t and being mad successful at it.

Wargaming is bringing World of Tanks to the Xbox 360 this summer, and it’s currently inviting people into open beta. Kislyi is excited about introducing one of the first free-to-play XBLA games. Nonetheless, the company isn’t forgetting about its PC players and will continue to serve them with two upcoming titles: World of Planes and World of Warships.

The idea is to make World of Tanks: Xbox 360 Edition as comparable to the PC version as possible without skimping on anything — some small cosmetic effects like explosions are actually improved on the 360 thanks to its dedicated hardware. And as a free-to-play title, you’ll be able to make in-game purchases or buy premium accounts.

But don’t worry about this devolving into another game where players with the deepest pockets will dominate. Wargaming has been moving towards what it calls “free-to-win,” whereby the game and everything therein is accessible to all players without having to pay a single cent. In-game purchases will only offer cosmetic enhancements or, if you get a premium account, a faster way to earn experience and in-game credits. This is kind of a big deal, guys.

Unfortunately, the Xbox 360 version will not be cross-compatible with the PC version, and you will of course need a Live Gold account to play online. So… technically not free-to-play. Still, Wargaming believes that 360 owners will find a lot to love about World of Tanks and would like them to enter the beta. As a bonus, players in the beta will be given in-game credits in order to test the purchasing system.

On the PC side, we have World of Planes and World of Warships to look forward to. And if you purchase a premium account in Tanks — starting at $10 a month — that same account will also cover Planes and Warships. Once again, 360 premium accounts won’t have this same benefit.

I don’t know how Wargaming has been able to become so successful almost giving this stuff away, but it’s a refreshing contrast to how companies like Activision and EA handle free-to-play. Good on them, I say!