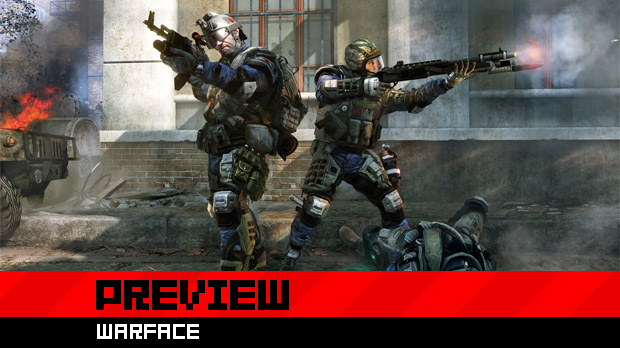 Development budgets are swelling, while consumer tolerance for higher prices is shrinking. It seems that we are headed towards an impasse. While the free-to-play model has already solidified itself as a viable alternative, there are few, if any, free-to-play games that capture what we expect from core, $60 experiences.

From the house that gave us Crysis comes Warface, a multiplayer shooter that aims to bring all the glitz and glam of a triple-A title to the free-to-play space. Originally an experiment to combat PC piracy in European markets, this game is hoping to replicate its success in Western markets and prove that AAA is not synonymous with premium.

First order of business we need to get out of the way: Warface is absolutely gorgeous. Running on a modified version of CryEngine 3, the game is optimized to look great and run well on older rigs. While the PC we played on was pretty beefy, you just don’t see game this good-looking — with visuals comparable to titles like Crysis 2 — in the free-to-play space.

Once you hop into the game, you’ll see there is quite a bit of meat on Warface’s bones. The game features both adversarial and cooperative multiplayer modes, with daily updated content for PvE. Combat is class-based across both PvE and PvP. The rifleman is your soldier archetype, acting as your team’s point-man, while engineers are tech and demolition experts. The sniper class plays as the name suggests, and medics revive and heal teammates. You’ll need to find the appropriate balance for each scenario if you plan to do well.

Co-op in Warface is essentially a mission mode for up to five players, and it is designed with this number in mind. In my time with it, enemy AI flanked, took cover, and otherwise adapted and reacted intelligently to the team. Warface really does demand teamwork from its players. The aforementioned daily updates add new elements to the game, such as XP boosts, as incentives to revisit even the most well-tread missions.

The PvP modes are pretty much the usual mix of Team Deathmatch, with a healthy sprinkling of objective-based modes. The moment-to-moment combat plays pretty much how you would expect a contemporary FPS to play, and while there’s nothing terribly exciting in that respect, it’s all good fun. The co-op provides a hardy challenge and that sense of relief and accomplishment when you finish a particularly challenging mission, while the gunplay controls well, offering fast and frantic fights in PvP.

With a free-to-play game that looks amazing, plays well, and offers a lot of content, the next obvious question is how this will be monetized. The answer: make the grind to unlock everything a steep uphill battle. Progression doesn’t move according to the modern FPS leveling system that Call of Duty 4 popularized. The system here is comparable to what we saw in Mass Effect 3’s multiplayer. Every batch of unlocks is a random event, and what’s more, there is an insane amount of items to be unlocked. Items in Warface come in three flavors: weapons, outfits, and equipment.

Weapons are self-explanatory, but even here, the guns are more about preference than acquiring that end-all-be-all gun that you stick with, so you’ll have to unlock a good amount before you find that batch of favorites. Equipment is essentially weapon attachments, running the usual gamut of scopes, suppressors and the like. Outfits change the appearance of your character while providing useful effects. These include vests that protect you from one-shot deaths by snipers, gloves that give you faster reloads, and so on.

You can of course unlock all of this content by playing the game, and Crytek is balancing everything so this doesn’t turn into a pay-to-win affair, but you have option to buy items. To clarify, you can not pay for individual items. Whether you pay or use in-game currency, everything you get is still random, so the grind persists. It’s honestly one of the more clever pricing models I’ve seen in a free-to-play game. Even in a full-priced game like Mass Effect 3, the grind to getting my Phaeston to level 10 or getting a new character was steep enough that I didn’t mind occasionally paying for my next Spectre Pack.

Warface is certainly a bold game. While the moment-to-moment gunplay is nothing terribly original, the game both lowers the barrier for entry, and raises it where production values are concerned. Anyone even remotely interested should hit up the open beta when it launches later this year.