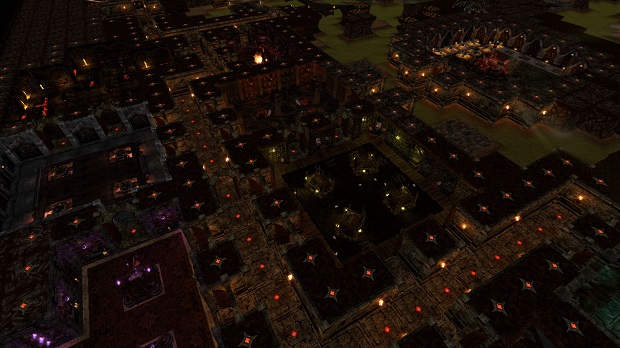 Defend your dungeon from plucky adventurers

When the recent Dungeon Keeper mobile game was released by EA, it went down like a barrel of stinking fish; it took the core concepts of the franchise and saddled them with a freemium model that made it a chore to play. Thankfully, UK studio Subterranean Games has been quietly working away on its own dungeon sim War for the Overworld since 2013 and now the team is ramping up for the final version to be released in early 2015.

I got some hands on time with the game at EGX with Josh and Scott, creative director and programmer respectively, and they fully admit that War for the Overworld is an homage to the original Dungeon Keeper. The game starts as you’d expect; you’ve got a handful of basic minions and you’ll have to dig out new rooms to expand your dungeon, build defences, and keep your evil denizens happy. Subterranean Games has even got the wonderful Richard Ridings to provide the voice over, in a nod to his Dungeon Keeper days.

It sounds reductive to say that “if you’ve played Dungeon Keeper, then you’ll know what to expect,” but it’s been a long time since there was a really good dungeon themed management sim released. Josh mentioned how the feedback from the players who have bought the Early Access version is almost universally positive. The team is planning on having War for the Overworld hit Version 1.0 in February 2015, but there will still be work to do afterwards. Both Josh and Scott were keen to have a cooperative mode in the game which is something I’d really like to try out.