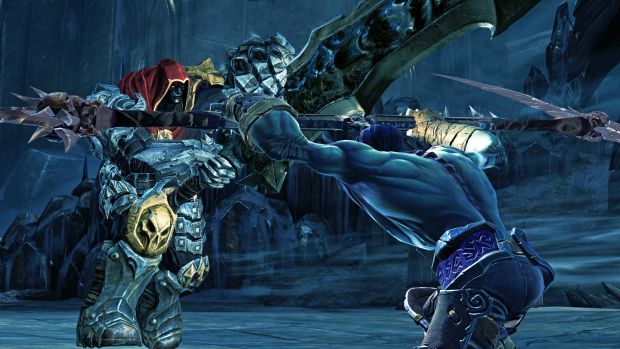 Whoa hold the phone! War and Death fighting each other?! That would be a cool plot twist, but it’s not as it seems. The War you see there is actually someone named Crowfather, disguised as War, and you come across him right at the beginning of Darksiders II.

THQ gave us another hands-on opportunity to play the game, right from the start up until this first boss fight of sorts. The level is pretty straight forward and simple, as it mostly serves as a tutorial guide.

Once you get to Crowfather, you find out he knows the secret behind the conspiracy that accuses Death’s brother for bringing about the apocalypse sooner than planned. Crowfather won’t tell Death the truth, and instead engages him in battle disguised as his brother War. Crowfather doesn’t stand a chance and is quickly killed off.

There’s not really much else to say from what we were shown, especially as our preview back in March has a ton of information based on a section we got to play further into Darksiders II. Check that out for a fully detailed preview, otherwise enjoy these new screenshots.