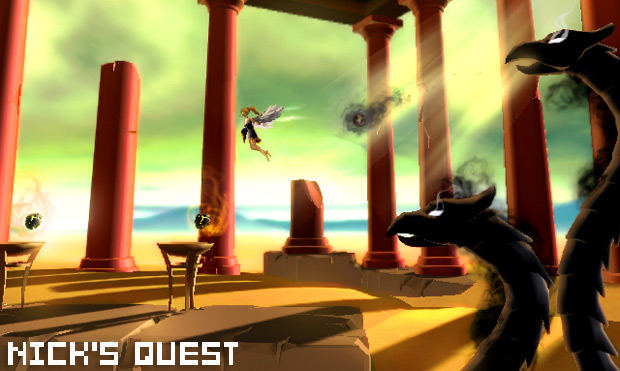 Ok, ok, I have to admit that the intro to Over the Top’s NyxQuest: Kindred Spirits (embedded after the break) is about four days old by now. But, here’s some logic: if I haven’t seen it, then there’s a fair chance that some of you haven’t either. Besides, I’m willing to post some old news if it means getting the word out about this promising WiiWare title.

The game has been out in Europe for about a month, but American hopefuls are still waiting for some sort of release date. Over the Top promises that an announcement is coming “very soon.”

When it does finally hit American WiiWare, at least we’ll. know what the first, say, two minutes entail: establishing the background story, told through scenes from stylized Greek pottery. Interestingly, though you play as Nyx in the game, the story is told from Icarus’ point of view, which I’m assuming means that he’s still alive. Most popular versions of the Icarus myth include him drowning to death after his waxy wings melt, but it seems that Over the Top have a different idea. I won’t tell you what that is, though: you’ll have to hit the jump to see for yourselves.

Previously known as Icarian, NyxQuest features a wind mechanic similar to  Frontier’s LostWinds — using the “powers of the gods,” (which makes sense, Nyx being a nymph and all) you have the ability to control the wind. This will allow Nyx to solve puzzles, kill enemies, and do some good, ol’fashioned platforming. You can check out some gameplay footage here.

So, now that Europeans have had a month to gloat for getting it first, how many of you fine patriots are looking forward to NyxQuest?