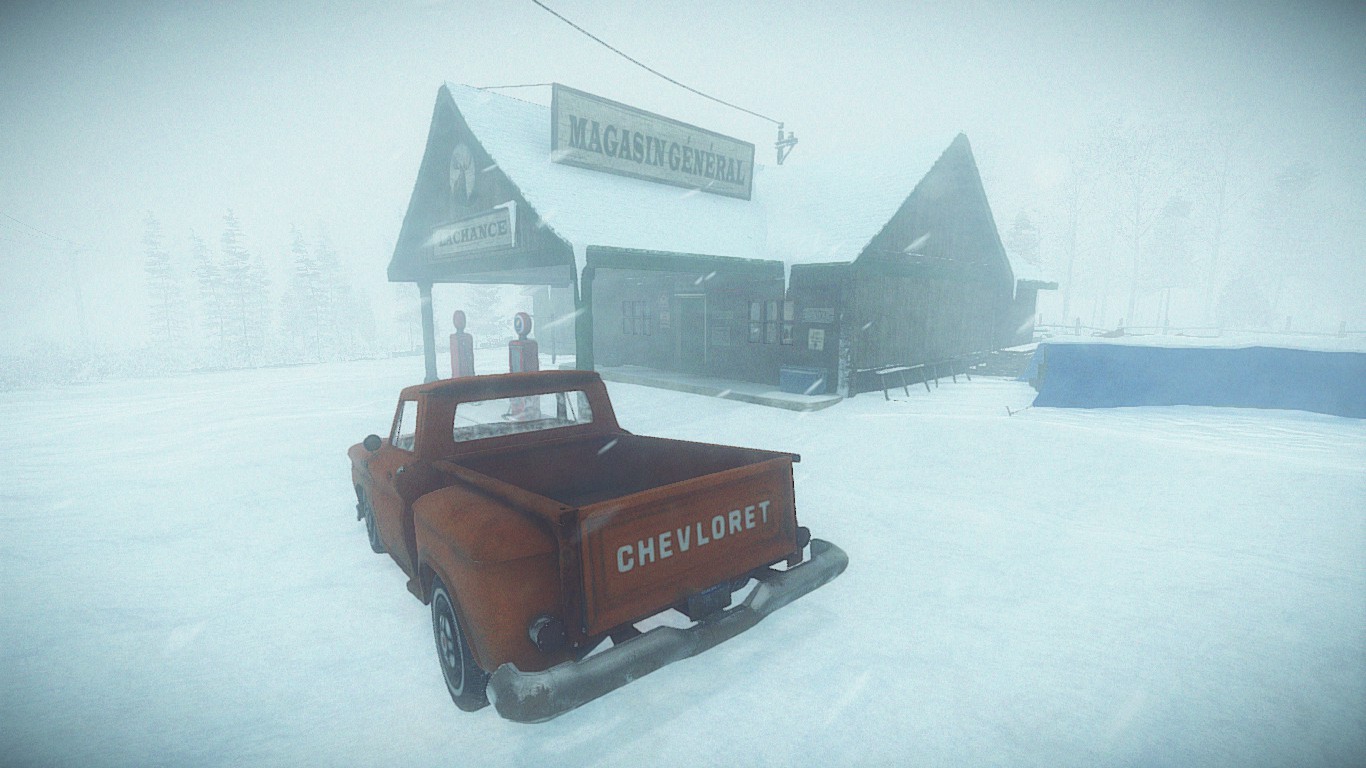 Carl Faubert’s Chevy truck rattles through a raging blizzard, his journey narrated by a Canadian Sam Elliott. I’m at the wheel, but barely in control. Out of the white, another vehicle speeds towards me. We’re on a collision course. Canadian Sam stops rambling enough to make it all the more surprising. I make a hard right and brake; a hard bump cushioned by the nearest snowdrift. I pause to reflect while they continue to speed away. They’re running, Canadian Sam figures aloud, from my only destination.

It’s not long before I find an abandoned gas station; its scattered remains tell me someone was either attacked or they left in a hurry. Out back, I follow some animal tracks into the nearby woods. There, I find my answer, trapped in ice. I head back to the Chevy, a colourful friend in a stark landscape, spooked and frozen. The dashboard heater keeps out the harsher elements, keeps me safe, but within its opening moments, Kôna: Day One has made it very clear: This isn’t just another walking simulator and you’d best be on your toes. 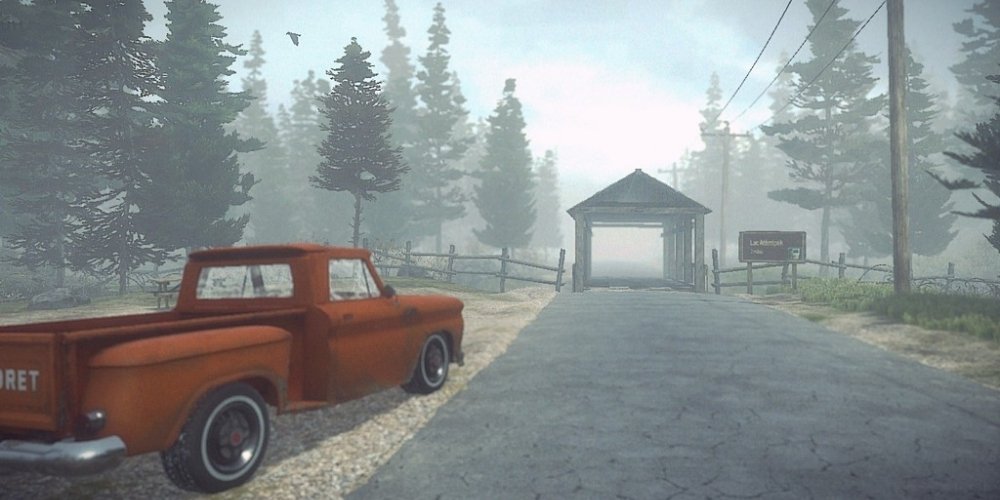 Kôna: Day One is part-mystery thriller, part-survival game. Though, thankfully, the two halves complement each other in fairly natural way. It’s Gone Home and Ethan Carter, only with a much-needed sense of urgency. The Canadian wilderness might seem overwhelming at first, but once you settle into the mix of environmental orienteering and investigative breadcrumbs, it actually becomes a tight, immersive experience.

Kôna‘s main mystery starts off hard-boiled enough, but not before revealing a supernatural hand. I won’t spoil too much, except it’s not really a horror game (at least not yet). As Carl Faubert, a down-on-his-luck private eye, you’re hired by an unscrupulous landowner named W. Hamilton for an easy protection job. His mining operation up at Atamipek Lake has disturbed sacred lands, winning him no favours with the local Cree community in addition to the hate he’s received from the townsfolk he has already put out of business.

But when Carl arrives in town, everybody has gone missing. So it’s up to the P.I. to brave the storm and find some answers. Unlike the passive nature of most exploratory game protagonists, it’s actually refreshing to play a character with genuine purpose and an ever-evolving goal. 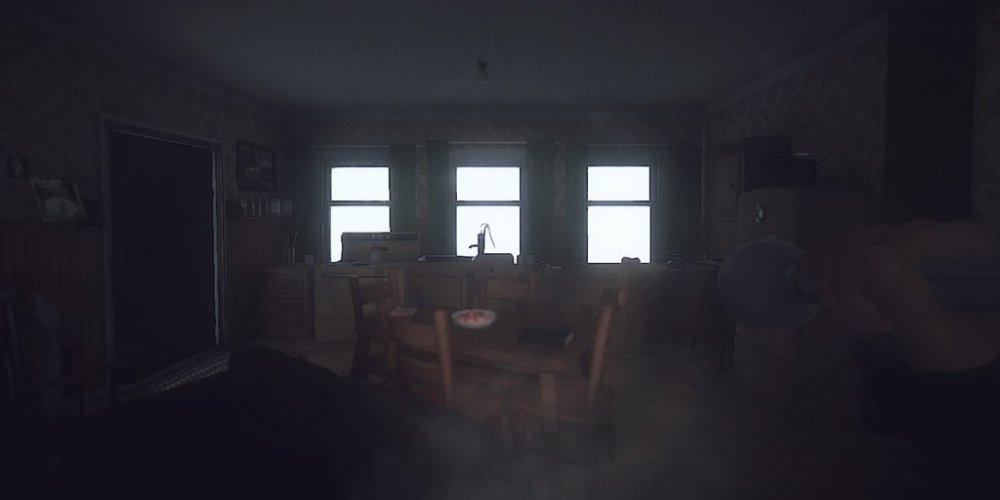 How you go about finding said answers is the crux of Kôna’s fractured narrative. With a map at hand, you must sweep the area by truck or on foot, invading empty homes for vital clues as to Hamilton’s whereabouts. Intimate portraits and small-town secrets weave in and out of the main case, along with fragments of murderous motivations and fed-up lives. Sometimes, you’ll start from the middle, or maybe near the end. Other times, you’ll find another perspective in a neighbour’s attic.

For the most part, Kôna paints a pretty picture of greed and cowardice, but due to the incomplete nature of Early Access, it loses some impact when you can’t put the names to faces. Also, due to the non-linearity involved, there are times when the game casually assumes you already know certain details, leading to some immersive skips if you’ve jumped the gun. Nothing drastic, but they’re there if you play it too Bogart. 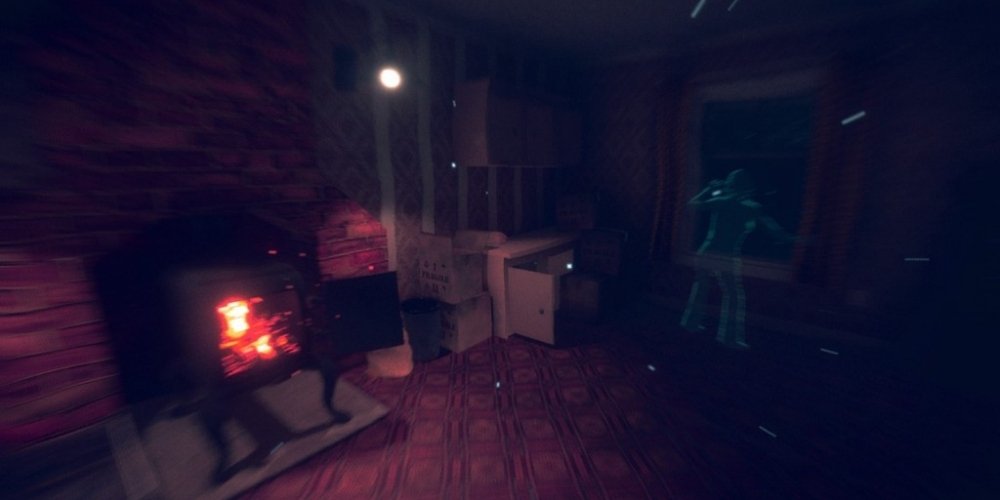 If you’re worried about the survival aspect being overbearing or obnoxious, don’t be. It’s meant to be simplistic; designed to make your investigations all the more rewarding. Need to start a generator? Simply click on the in-world icon, auto-combine your items, and you’re done. Kôna: Day One does hint at more crafting mechanics and survivalist weaponry, but for now, the most it ever asks from you is firewood for a stove.

Keeping warm is vitally important. Fires and heaters keep your stats up, prevent snow-blindness and a loss of health, and also provide you with some much-needed checkpoints. The spaces between fires are long and winding, though luckily, you’re never too far from your trusty Chevrolet. It can’t go off-road, but the heater keeps you warm and it’s the only way to get from A to B without having to brave the elements for too long. It’s, essentially, an extension of Carl, rather than another tool to get by.

As as side note, I particularly love the way Carl waves his hand over the heater, taps the steering wheel impatiently, and has to shift his body around when going in reverse. It’s the little things that keeps that Chevy ticking in the back of your mind; especially when you have to abandon it to go trudging deeper into the woods. 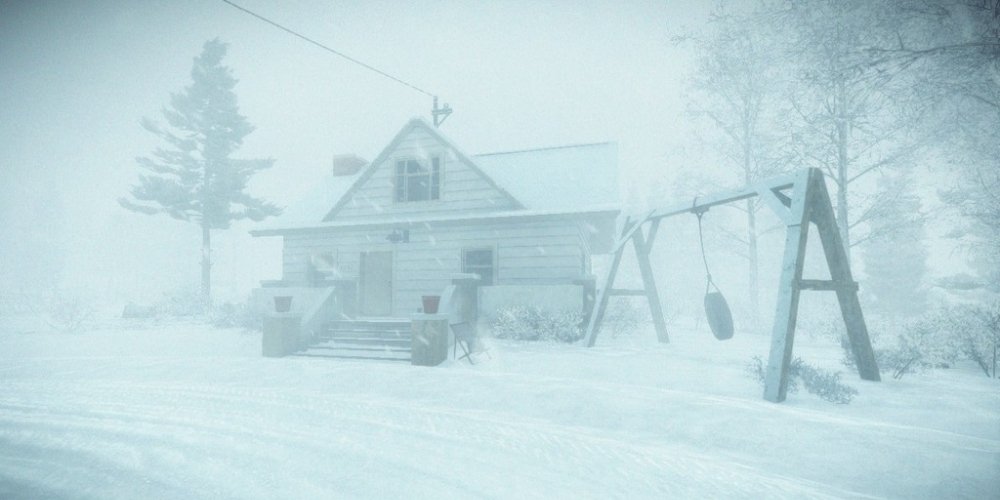 Exploring the stark wilderness of Atamipek Lake is usually a gamble, and looks likely to be your only way forward in the second half of the game. But while the pelting snow obscures the way, long lines of animal tracks usually lead to unmapped points of interest. Again, it’s another great example of how Kôna uses its environment to create natural, minimalist pathways. It does an excellent job of indulging your own morbid curiosity while keeping you on a subtle track, away from unnecessary death.

This is an atmospheric experience, rich with dark humour and mystery. It’s also a nice reminder that good things can come from the Unity engine when it’s not being abused by charlatans. It’s not a technical powerhouse, I know, except once you see those tree animations and weather effects, it is hard not to forgive the odd graphical issue (my advice is to turn off “depth of field,” it’s too much). Admittedly, in its current state, the crafting aspect is a little undercooked, and because of that, some might see it as another dreaded walking simulator. In its defense, it doesn’t take long to see how the game will combine such features for a far more rewarding investigation. 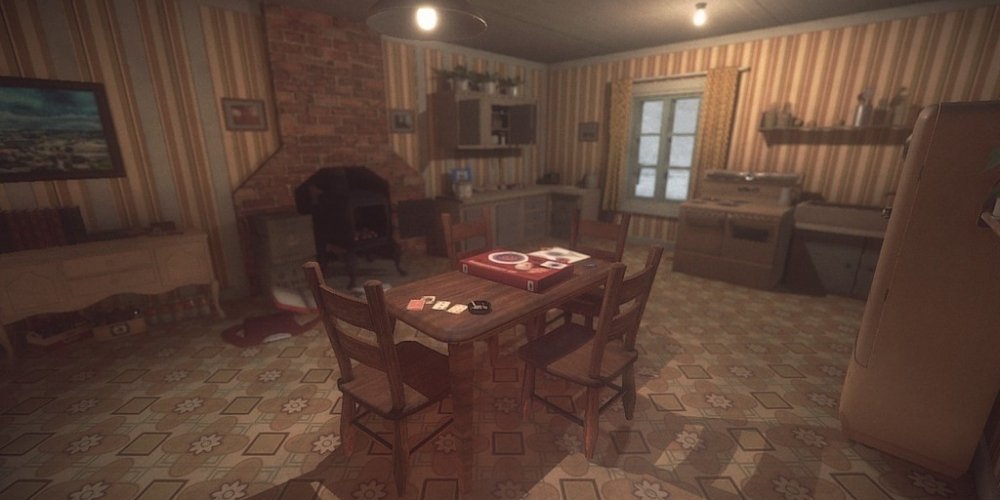 My time with Carl and his Chevy did come to an abrupt end, stopping on a self-imposed cliffhanger, the vital keys locked behind an Early Access perimeter wall. But despite that, there’s enough bewildering moments to leave you wondering, “What’s next? What about Day Two?” Though if you ever find the creepy kid’s drawing in the attic, you’ll probably think twice about finding those answers.

As it stands, Kôna: Day One is one otherworldly mystery with a hard-boiled edge, and once the survival aspect has been fully implemented, it’ll have the kind of grit it justly deserves.