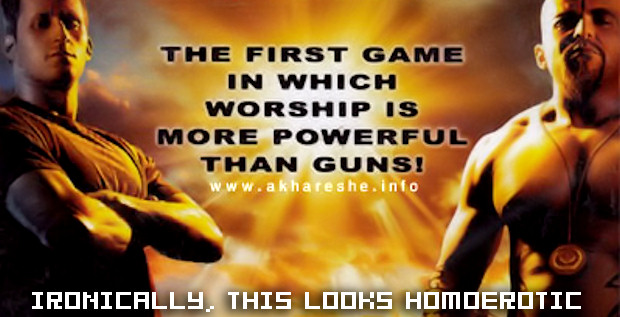 Most of you will have at least heard of the Left Behind series. For those that haven’t, they’re a series of screwed up PC titles that allow Christian extremists to either convert or kill non-believers. In a somewhat terrifying twist, users can pray after each kill to rid themselves of guilt. I’m totally against the idea that videogames can cause violence, but the twisted Christian morality in the Left Behind games is more than a little creepy.

Well, Atheists better watch their step, because publisher Inspired Media is getting its scary Christian games sold in Walmart on a trial basis. Yep, the sexism, racism, intolerance and hatred of Left Behind is going to be sold by America’s largest retailer, ensuring that this game will reach a potentially huge audience and shall no longer be confined to the hardcore fundamentalist nutjobs that the game was designed for.

That’s all fine and dandy. These games are insane but they have a right to exist. Still, I find it amusing to note that games this psychopathic and downright offensive usually cause outrage and calls for a ban, but just because this is one comes God-approved, Walmart has no problem selling it. I guess anything’s absolutely okay if you do it in the name of THE LAWD, right?

Meanwhile, I’m hoping a great many sensible and non-psychotic Christians would like to join me in a facepalm.