Big boy on the block

Over the PAX East 2017 weekend, I sat down to play through a slice of Final Fantasy XV’s upcoming Episode Gladiolus DLC. Though I can’t talk about story-specific details – both at the request of Square Enix and because I already forgot what the hell happened in that game – I’m free to talk about how Dave Navarro Gladio handles himself in combat.

After thirty minutes of beating up monsters as Gladio, I don’t ever want to control Noctis again. Though I loved Final Fantasy XV, I always felt like the action-based combat system could stand to do a bit less. Noctis, with all of his Warp Strikes and weapon swapping, often made even the most basic encounters seem like over-the-top engagements. As Gladiolus, however, I found myself smacking enemies and blocking attacks with a big, dumb grin on my face.

Though most of Gladio’s moves are similar to those found in the base game, the DLC does include some tweaks to better suit his sword-and-shield tactics. After a few battles of whacking fools with reckless abandon, I realized that chaining attacks together rewarded me with souped-up skills, many of which were useful for topping multiple enemies at once. 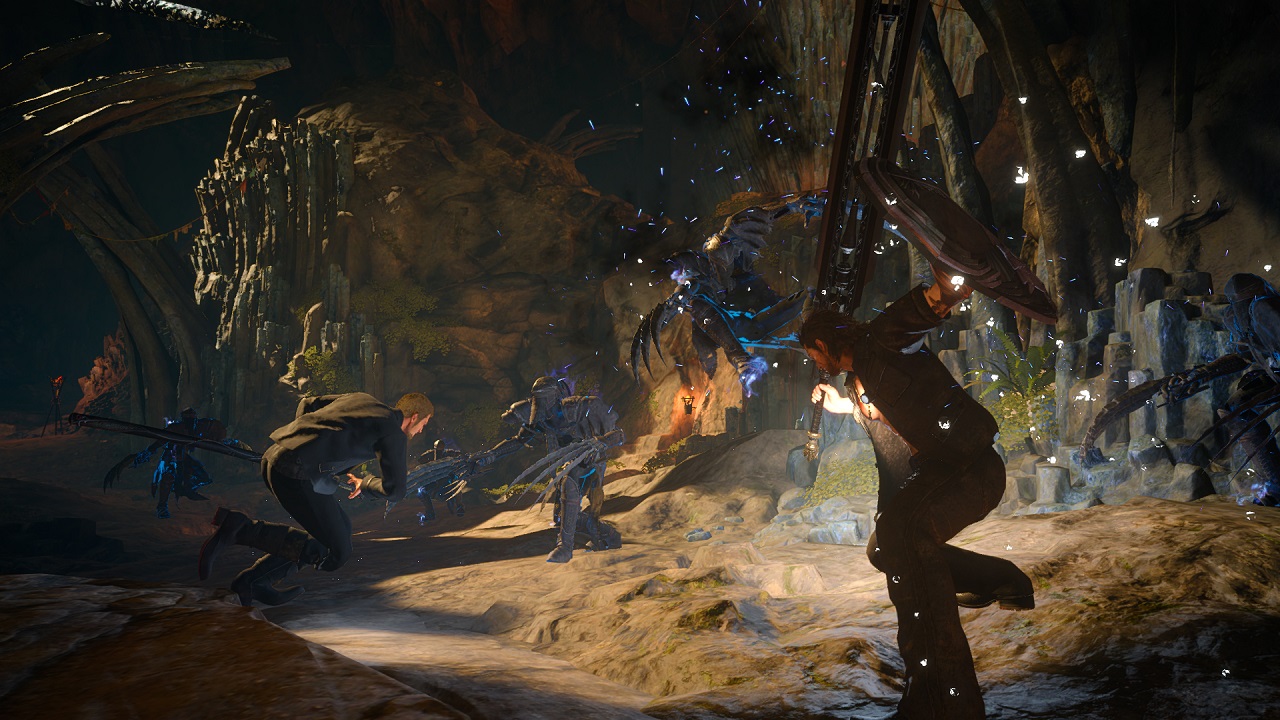 Gladio’s no slouch when it comes to defense, either. As I progressed through the demo, I found that carefully timing blocks didn’t just reduce (or straight up negate) incoming damage, it also built up a new meter that translated into a higher offensive output. By easing off the attack button and blocking incoming attacks, players can turn their next melee into a flurry of boosted attacks, which is a nice change from the base game’s combat loop. As they say, the best offense is a good defense, so long as it lets you hit enemies even harder.

By the time my session ended, I’d taken down two bosses and dozens of lesser minions. Gladio’s “in your face” style of fighting – even when outnumbered – was always involved and exciting. For the first time in Final Fantasy XV, I felt like there was some real weight to my attacks. Every one of Gladio’s strikes that connected with an enemy landed like it had been delivered by a jackhammer all hopped up on Cup of Noodles.

There were a handful of notable moments that came out of my time with the demo. Most of them are tied to tidbits of story that I can’t talk about, but one combat encounter deserves a special mention. At the end of the demo area, I beat the piss out of a boss with a cement pillar that Gladio ripped from the ground. Think about that for a second. Gladio, a character whose defining characteristic is his inability to wear an undershirt, can pick up a stone pillar, walk up to a boss, and smack it until the pillar crumbles. If that’s not a hallmark Final Fantasy XV moment, then I don’t know what is.

Final Fantasy XV: Episode Gladiolus will be available on March 28.