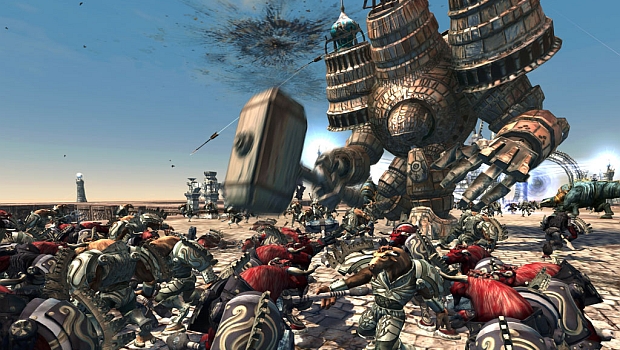 Seriously? I mean, that game has little more than a skirmish mode as its solo component! For chrissakes, it’s a Defense of the Ancients clone! Games like that don’t roll well solo.

But hey, people can do what they like with their money. As for how we came across that info, Stardock released its regular public report, hyping the success of its Impulse digital platform, but the big shocker to folks not interested in knowing about how Stardock are cool folks (shame, since they really are cool) were the usage statistics for Gas Powered Games’ Demigod. Only 23% of people who bought the game – even after accounting for piracy, since Demigod was released sans DRM – actually tried to play online.

And by “tried” we mean something as little as going to the multiplayer menu and logging in. Just 23%. And it’s not as if the game is a flop either (despite what Heroes of Newerth players insist), since the report notes that thousands of copies still continue to sell weekly, enough to keep the game on shelves through the holidays. Stardock had this to say regarding the observation:

Our conclusion is that strategy games that we make and publish in the future will support multiplayer but will not sacrifice the single player experience to do so. Developer Gas Powered Games has continued to update and provide support to Demigod despite its work on Supreme Commander 2. At the time of writing, two new demigods are nearly completed along with a couple of significant updates.

That’s a conclusion I can definitely get behind. I’m really not a multiplayer sort of person, and all the talk about singleplayer being a dead (or dying) thing frankly scares me at times. At the same time, someone could go and fling games like Starcraft in the face of this, since that’s still going strong. Then again, even Starcraft had a pretty great campaign, and Blizzard promises Starcraft II  will as well.

Let’s hear you strategy gamers sound off. Are you in the 23rd or 77th percentile? How important is the campaign to you?