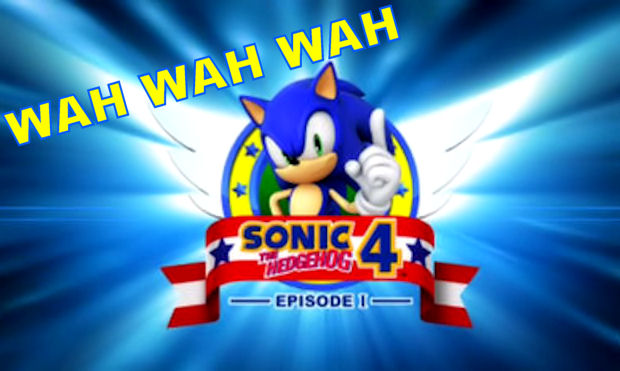 So, Sonic the Hedgehog 4 was announced at midnight. After much teasing, it was revealed that Project Needlemouse would become the official sequel to Sonic 3, continuing where the 16-bit game left off to provide us with an honest-to-goodness 2D platformer. No more silly furry comrades, no more bad music, and no more Z-grade JRPG narratives.

So of course, everybody complained about it.

Wah, it’s episodic! Wah, the Sonic cycle! Wah, Sega never does anything right! Bitch, bitch, bitch was all that came out of some of your mouths. Well everybody shut up and listen now. Stop doing that thing where gamers come across as whining douchebags who can’t be happy with anything, and learn to give Sonic 4 a chance.

The first major criticism to come out of this teaser is the fact that Sega chose to make it episodic. I’ll admit, this threw me for a loop. The first instinct is to wonder why Sega can never keep anything simple, and why it feels the need to add in weird extra details that nobody asked for. Sure, the episodic thing is weird, but why are we being so quick to shit all over it? What, exactly, is suddenly so wrong about episodic gaming that it’s already made Sonic 4 an instant no-buy for some people?

We don’t yet know why this game is episodic, and how Sega will implement it. All we know, right now, is that Sonic 4 will be broken into staggered releases. There’s no way of knowing if that’s a good or bad thing yet. Already people have stomped their feet and shouted, “Well I’m not going to pay ten bucks just to download one Zone!” Who the Hell said that’s what Sega is planning? You don’t know, so shut up about it.

Sure, the episodic deal could be a scam, and it could turn out to be a bad investment. However, what if the episodes were roughly the length of a full Genesis game each? What if they’re short but ludicrously cheap? We just can’t tell how it’s going to turn out. A few people balked at the idea of an episodic platformer, but why not? Who said that episodic games should only be reserved for point-and-click adventures or Half-Life 2? I say let Sega try it with a platformer. It might just be crazy enough to work.

Of course, it’s hard to expect everybody to automatically trust a new Sonic game, no matter how many appeals to nostalgia it makes. I am fully aware that Sonic has had chance after chance after chance, and he’s blown almost every single one of them. Sonic Unleashed was the franchise’s best console effort in years, and that was a disappointing game full of poor design decisions. I am not so unaware as to wonder why people are wary of Sonic the Hedgehog 4. However, it’s the complete refusal to even entertain the thought of it being good that grates on my nerves.

Yes, most recent Sonic games have sucked, but then, most recent Sonic games have been made with a callous disregard for the franchise’s past and a refusal to work in anything but 3D. Let’s look at the last time a studio embraced Sonic‘s past and created a good 2D game. It was Sonic Advance on the GameBoy Advance. It was also a bloody brilliant game. All it took was a healthy respect for what made the old school Sonic games good, and a solid dose of two-dimensional platforming.

Hell, the Sonic Rush games might not be fantastic, but they are at least pretty good. It seems that if you put Sonic in a 2D game, he has a very solid chance of becoming decent. If Sega sticks to the formula, and the early teaser seems to indicate that it will, then there is a very good probability that Sonic the Hedgehog 4 will be a success.

The Sonic Cycle has been a universal truth for years. Every Sonic game has gone the same way. The game is first revealed and fans are excited for Sonic’s triumphant return. Then more screenshots arrive and we see a cast of new furry friends along with the same wretched gameplay we’ve been suffering for years. Finally, the game comes out and fans pledge to never be tricked again. Yes, the Sonic Cycle has been an unbreakable truth for a long time, but we already know that the second stage of this cycle is completely wrong. Sonic the Hedgehog will be the only playable character in Sonic 4. As for the same wretched gameplay? Well, we also already know that the gameplay will be in the same vein as the original Genesis games.

It would appear that the Sonic Cycle does not apply in this particular instance.

Perhaps one of the stupidest arguments I’ve seen is that Sonic 4 sucks because it is not “innovative.” In fact, here’s an exact quote from a cynical GameSpot reader who apparently couldn’t wait to dump all over the game:

16 years and your teaser is 2 seconds of game play that looks frighteningly identical, but in HD! … bravo Sega. What makes this interesting and new, aside from “it’s new 2d sonic!”? What’s the innovation? Why is this a necessary sequel?

Really? First of all, since when was any sequel necessary? These are videogames, not cancer cures. Secondly, do people like this not understand what a reboot is? It’s about going back to basics. That also answers the question about it being “interesting and new.” I’d say it is rather interesting to get an old school Sonic game in 2010, and I’d say it’s a fucksight more interesting than yet another first-person-shooter or yet another JRPG. A game doesn’t have to be innovative, it just has to be good. People have clamored for a Sonic game that brings back the classic gameplay, and now that we appear to be getting one, people are going to bitch that it’s not innovative? Isn’t the quest for innovation part of what killed Sonic in the first place!?

You can argue that Mega Man 9 wasn’t innovative. Christ, that was less original than Sonic 4, considering the fact that it copied the NES games right down to the glitches. Mega Man 9 was about as unoriginal as it could get, but it was also one of the most critically acclaimed and commercially successful digital games ever.

Sega’s marketing right now indicates that it knows what it’s doing. The concept art featuring classic Badnik enemies, the retro-themed music, and the very clear focus on retro Sonic fans all point to a Sega that realizes what it needs to do in order to make Sonic 4 a hit with gamers. While that hit is far from guaranteed, this is the best sign we’ve had in years. Let’s not be so quick to disregard it, eh?

Ultimately, I think that shitting on Sonic 4 so harshly after less than ten seconds of game footage and a unique distribution model is not only presumptuous, but very silly indeed. If you’ve already decided not to buy the game just because it’s episodic, or it’s a Sonic game, or it’s not innovative enough for you, then there’s something very wrong inside your mind. I am not at all saying that the game will definitely be good. Nor am I saying that a dose of wise skepticism isn’t required. However, those bitching about the thing within twenty-four hours of its announcement simply demonstrate to Sega that they can’t win, no matter what they do.

Now, this last message is for Sega itself: Don’t fuck this up, okay?