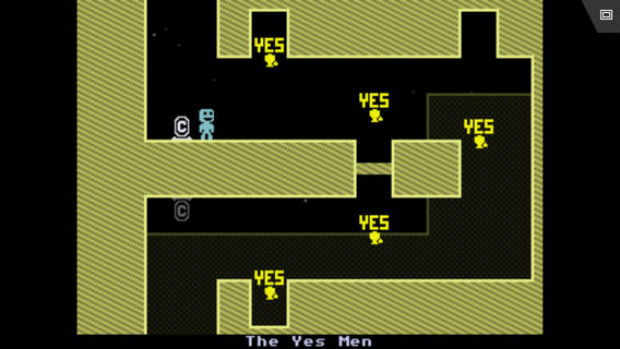 Who would have thought?

VVVVVV blew everyone away some time ago with its perfect pacing, amazing level design, and forgiving checkpoint system. Years ago everyone would naturally scoff at the notion of it appearing on a mobile platform. But thanks to some hard work by creator Terry Cavanaugh, it actually worked out in the end — VVVVVV plays great on iPad, amazingly enough.

I had a chance to try the game out extensively this week, and I’m happy to report that the control scheme is pretty great. The left side of the iPad will move Captain Viridian to and fro, and the right side is used for flipping — you can also opt for a virtual d-pad if that’s your thing.

Because VVVVVV inherently has a forgiving checkpoint mechanic, it isn’t too frustrating if you miss a flip while you acclimate to the new touch scheme. But for the most part, it didn’t take me long to figure out how to get around, and I was flipping like a pro in minutes. In addition to the core game (which is the exact same), it also comes with a few custom maps to play around with, opening up the possibility of more through free updates.

If you aren’t keen on dropping the $2.99 on the full iPad version just yet, try out the free Super Gravitron minigame instead.