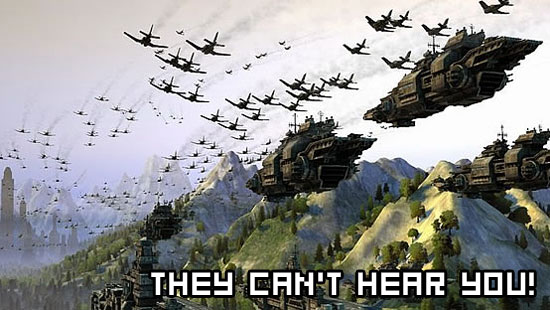 Newsweek’s LevelUp blog has confirmed with Sony Computer Entertainment that later this month, retailers will start carrying a new $39.99 SKU of the PlayStation 3 online-only title, Warhawk. This SKU will not contain the Jabra Bluetooth headset, which shipped to retail (alongside the $39.99 digital PlayStation Network download) at $69.99. While SCEA hasn’t confirmed a release date, GameStop’s Web site is listing an October 10 ship date.

LevelUp’s N’Gai Croal predicts that this is indicative of Sony’s future strategies — games like the upcoming SOCOM: Confrontation, for instance, will likely ship with and without headsets (in addition to appearing on the PSN). While I can agree with that, his speculation that Gran Turismo 5 Prologue may ship with a limited number of bundles containing a Logitech racing wheel seems like a bit of a stretch. But then again, N’Gai talks to people who still won’t return my phone calls.

Whatever the case may be, if Sony’s looking to confuse the hell out of consumers will multiple SKUs and distribution methods, they’re on the right track.