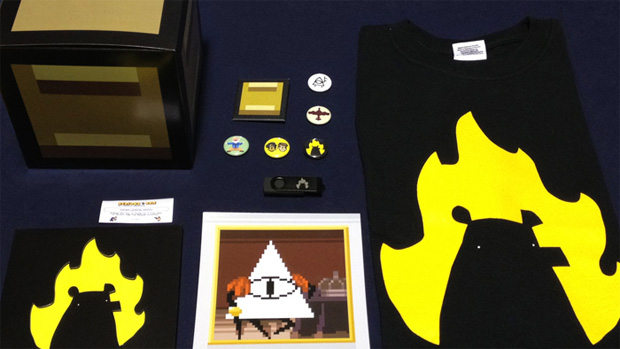 From inside the Indie Megabooth at Pax Prime this year, the merchants at Level Up Studios were selling these limited edition Super Crate Box bundles celebrating Vlambeer’s second anniversary. The Super Crate Bundle included a t-shirt, ten of the developer’s games, a soundtrack CD and a bunch of other cool stuff packed in a cardboard crate box. Now, Level Up has made the remaining copies of the bundle available to those who were previously unable to score one.

The pack runs $49.99 and I wouldn’t expect them to last very long. Only 250 of these bundles were produced and it’s the only way I currently know of that you can buy a copy of Gun Godz, a DOOM-esque shooter with amazing music produced to support the Venus Patrol site launch [Correction: You can still get GunGodz by subscribing to Venus Patrol, so that’s another option. -Ed]. You can order yours at Level Up’s store.