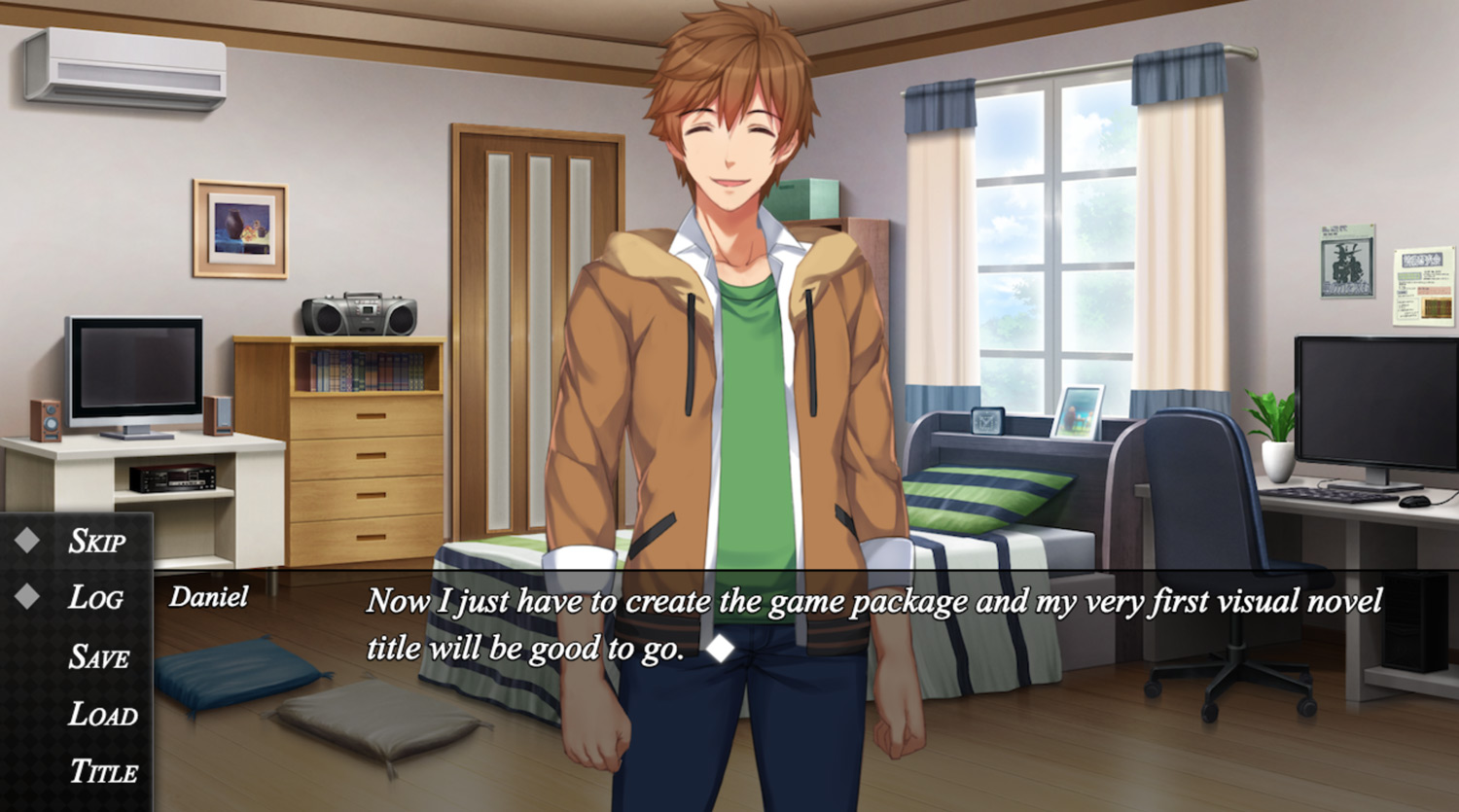 My time with the Beta

If Steam tracked how long we stared at games in the Steam Store the same way it tracks how long we actually play the games we own, it would probably show I’ve stared at the listing for TyranoBuilder for approximately five hours. I’ve always had that desire to write and create my own visual novel, but due to my artistic talents being par with those of Janey Briggs, I’ve withheld putting any money down on programs that would require original art.

Then came a beta opportunity for Visual Novel Maker.

Originally set for release around this time last year, VN Maker was delayed to provide more time for Degica to work on its development. I applied to be part of the Beta and was lucky to get in. With only 20 people select, I felt I had a responsibility to make sure I did it right. Working a full-time job with a three-hour daily commute kept progress to a minimum early in the process. Add in traveling over one weekend to visit my mom on Mother’s Day and I had mostly wasted the first two weeks of the roughly six weeks I would have to put together a sample project. In that time I was given a behind-the-scenes look at game development. Seeing how the sausage is made is allowing me to look at the hard work of developers I frankly couldn’t before.

Going into the beta, I had stars in my eyes. I had big hopes and dreams for what I would be able to do with this software. I had a script, a sci-fi dating simulation based around the ‘Marry, Screw, Kill’ game we play whenever we see three celebrities on screen at once. It was going to be funny, sad and, depending on how strong my writing would be, a bit gross as well.

That idea is still just an idea. When I finally opened up the software and started poking around, I realized that concept would not be possible. One of the reasons I was so excited to give VN Maker a try is the included assets. Like RPG Maker, another program I own and have used for all of 30 minutes, you don’t have to be good at creating characters and backgrounds to make a visual novel. There is an assortment of characters and locations included, however, they’re all based around a single theme: dating.

Characters are an assortment of high school students with a few adults and kids sprinkled in. After seeing what I had at my disposal, I had to come up with a new story from scratch and fast, because I didn’t know exactly how long it would take me to put this project together. Even as I write this I’m now imagining jimmying up a parody of the Danganronpa games. By the end of week one of the beta, I had my story, and after a few modifications due to the limited number of available characters, I had my script. It wasn’t for another two weeks that I would actually begin “production” of my game.

It’s intimidating, or at least is for me, to tackle new software like this. I’m not a game developer, outside of creating around four dozen or so Super Mario Maker levels. I don’t know any programming languages, I’ve never made a mod, and as mentioned before, RPG Maker remains mostly unused on my MacBook. The closest I have come is writing up a few chapters of a Twine murder mystery.

That intimidation, as well as a busy schedule, kept my participation in the beta to a minimum until back-to-back three-day weekends provided me the opportunity to really lean in. At the library and at my desk, I slowly started piecing together, trying to get it as close to my vision as possible.

The layout of the program is clean and easily understood: I simply grab whatever command I want from the list and drag it to the timeline. VN Maker also has a programming language, but I did not touch it outside of making a few cosmetic additions using instructions found in the extensive yet discombobulated online manual. My first scene, a short conversation between two characters in a park, took roughly two hours to complete. The next scene, more complicated with the same two characters but multiple locations, transitions, and text types took another three. My third scene, an even more complicated set-up, took roughly two and a half hours to finish. Two days before the project was due, that scene was somehow copied over with another one forcing me to restart from scratch. That took only 45 minutes.

Getting the basics for VN Maker is a quick learn and the creation process eventually would take me minutes instead of hours. Even with my full-time work schedule, I was able to create something that may or may not be good but was nonetheless what I was aiming for. With some adjustments, my vision could be easier to pull off, but as I learned and as I continued to develop my game, the realities of this being a Beta started to sink in.

I was asked to create a sample project in this limited timespan and report any bugs and errors that I found. As a member of the Backlog group for this project, my email is filled with reports of bugs and errors from the more competent Beta participants that have frankly humbled me. I know the period right before launch before a game goes gold is bug squashing season for developers. I know that, but to be a part of it, to see the daily or sometimes twice daily updates that readied the game for launch. It really opened my eyes to just how difficult it can be to release a product so many of us take for granted.

Here I am, stupid me, building this game as they are building their game around mine. I get frustrated when something doesn’t work right and want to just give up because hell, I ain’t getting paid for this. Yet here they are, working tirelessly to get this software to the point where they can finally say get it on Steam. The scene being copied over I mentioned earlier? Whatever bug caused it was squashed a day later and hasn’t been a problem since.

I still don’t know everything there is to know about the program, but I will say despite the stress of trying to do all this in such a short amount of time, the beta for VN Maker has reignited something inside me. The part of my brain that convinced me to move down to LA to try and start a career in screenwriting has been Frankensteined back to life. The creative spirit lives in me once more and now I am more than ready to persevere any obstacles I may face to complete these projects I’ve always talked about doing. That Twine game will be completed. I will create an RPG Maker project. I will mod… something. God willing, by this time next year, I will know a programming language.

If you’re wondering about the game I did end up making, a murder mystery featuring high school students and a being from the fifth dimension, it’s not available to play. Unfortunately, the biggest bug I found wasn’t in the program, but in me when I accidentally deleted it. All those hours of work, down the drain. This bug where I stupidly don’t back up my work now that I actually have something to back up has been squashed thanks to a new external hard drive.

I ended up submitting a make-up project that I threw together over the weekend. I feel bad that it was all I was able to contribute while more professional developers involved in the Beta are likely working their magic, but the itch that month of writing and developing put in me is one I won’t be able to scratch away anytime soon.