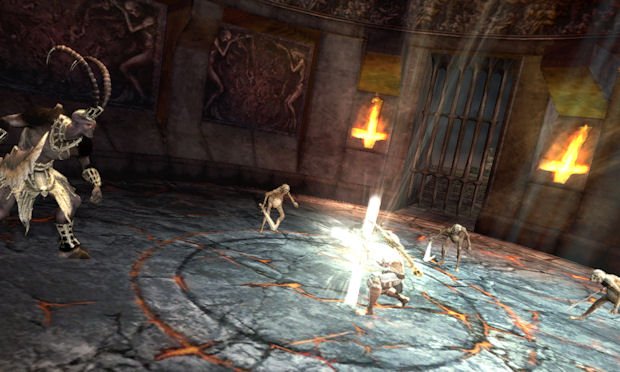 Visceral drew the ire of bookworms and literature students when it revealed its videogame adaptation of Dante’s Inferno. Some believe the classic poem has been violated by a tasteless videogame company doing tasteless videogame things, but the studio has hit back by claiming that true fans of the poem actually love the game.

“Generally those critics are often people who weren’t fans of the poem and weren’t that familiar with it until they heard we were doing this,” alleges executive producer Jonathan Knight. “What we’re finding is, a few people anyway, that quite clearly didn’t know it well, now have gone off and read it and they’re looking for ways to go, oh you’re taking liberties here, or you didn’t do this, or whatever. But the reality is that true Dante fans, people who actually have spent time with the literature and care about it are over the moon with the game project.

“I like to say the game is a celebration of Dante. There are more people going to actually read the poem, learn about The Divine Comedy, read up on Dante and what he meant to western culture, than otherwise would have. That’s a good thing. The game’s not meant to replace the poem. It’s not meant to be like, hey, play the game and you don’t have to read the poem. The cool thing is the opposite is happening. More people are reading it, not less, because of the game.”

I think Visceral has it right. The Dante’s Inferno videogame can have as little or as much to do with the poem as you want. It’s not taken anything away from the original work, and those crying sacrilege really are getting worked up over something that has no real impact on their enjoyment of literature. It’s a videogame. Its job is to entertain us a game, not as a book.

Of course, if the game itself sucks, then feel free to criticize it to the Moon. But let’s wait on that, shall we?