Me and my broken eye were in space

A long time ago, Valve and HTC boasted that their upcoming VR headset — the HTC Vive if you’ve somehow managed to miss it — would cause nausea for “zero percent of players.” That sort of absolute statement got me interested, because if they could fix a problem as common as motion sickness for everybody, maybe they’d also managed to fix my slightly less common problem too.

I’ve got a condition called Ehlers-Danlos Syndrome. It’s a disorder that affects my connective tissue, and one of the many fun effects of that is I have absolutely awful eyesight… but only in one eye. On a good day, my right eye is incredibly weak and vision through it is blurry. If I get tired or ill or stressed, it can practically make me blind in that eye.

Last year, at Rezzed 2014, I had a play about on an Oculus Rift. It was a neat demo, and it would’ve been a really cool first experience of VR… if it worked for me.

As it was, it just looked like a cinema screen to me. I was acutely aware of the blackness surrounding the game, and the game’s way of simulating 3D space just didn’t mesh with how my own eyes struggle to handle it. It took me completely out of the experience, and put me off the future of VR in its entirety. I may as well have stuck with monitors for all the good the Rift did for me.

So of course with Valve making the claim the Vive worked for everyone, I wanted to put it to the test. It’s not every day my gammy eye can be put to use, so off I went to the HTC Vive booth at EGX 2015 with UK Editor Laura Dale. At first, I let her have all the fun (and you can read her thoughts on the Vive here if you want), because it seemed a waste of a great demo if my eyes made the VR bit pointless. She knew the tech, she had experience with VR, and until then I was convinced it wouldn’t work. What was the point in me trying?

But then we were both given the chance to go and play Elite: Dangerous, complete with a flight stick, a thruster controller, and lo and behold… the Vive. My time had come to go and prove Valve wrong. Time to prove the Vive was just another VR headset. 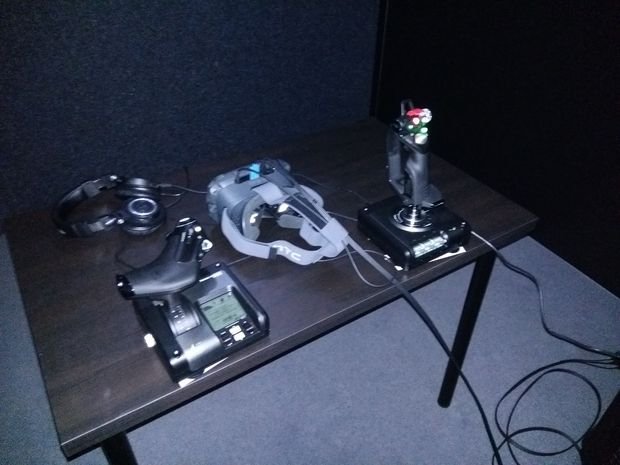 It’s worth noting at this point that this was the second day of a very loud, badly-lit event, and I was absolutely knackered. My eye was about as bad as it could be without being totally blind, and so I was in the prime condition to try and prove Valve wrong with its absolutist claims. I even took my glasses off, I was so ready to catch them out.

I was getting ready to feign interest in the game as the goggles were lowered over my head. I’d had practice with the Rift after all: politely try and finish the demo and contain my disappointment at yet another bad VR experience.

But as my eyes adjusted to looking out into space, I realised that holy shit… It worked. Me and my janky eye (powered purely by the godawful energy drink they were handing out to EGX visitors) were able to actually enjoy VR for the very first time.

It was strangely emotional, looking around with nigh-on perfect head tracking and seeing a whole world which wasn’t the one I was sat in. I’ve heard plenty of reactions to using the Vive: people crying, people shaking, but it felt different to me. A part of me was impressed with the technology, but a bigger part of me was relieved that my condition maybe hasn’t precluded me from the VR future after all.

I couldn’t quite breathe, and every time I managed to talk it was peppered with swearing and “oh my god”s. Those reactions were not earned by the game itself, as fun as Elite may be I had no god damn idea what I was doing, but by how VR had just been opened up to me at last after spending the last year convinced I would have to let it pass me by.

I found myself completely immersed in my little spaceship, and I totally forgot about the huge convention going on just outside that room. I wasn’t in that small, cramped booth any more, I was in space. I would try and find the enemy by leaning over the back of my chair (and almost falling off), the HUDs of the spaceship flickering on as I turned to look at them… it wasn’t the small cinema experience I’d had with the Rift, and it wasn’t blurry even without my glasses. It was the VR experience I had built up in my head during the last year of people bragging about it to me, and holy fuck it worked. 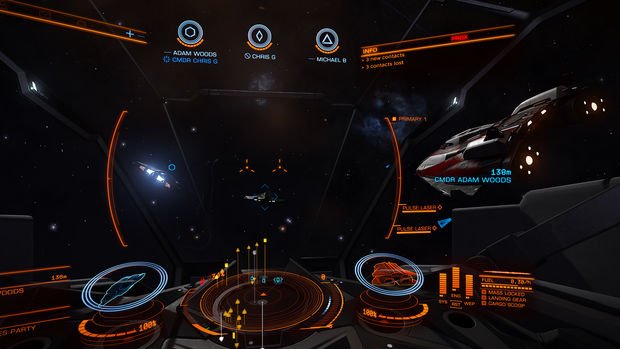 After Laura and I had played Elite on the Vive, all I could really do was stare at her in disbelief. I had felt slightly left out when she reacted in the exact same way ten minutes before, when coming out of the previous demo. There was a weird mix of “holy fuck that tech is amazing” and “holy fuck that tech works for me.” I was still thinking about it well into playing other games throughout the day.

So while I can’t really confirm or deny Valve’s claim the Vive works for everyone, I can confirm it worked for me, the guy who even blue-red 3D glasses don’t work for. The Vive’s technology is amazing for everyone who’s at all interested in virtual reality I’m sure, and for VR connoisseurs it’s probably the best headset currently in development, but that doesn’t really matter to me. I’m just relieved something finally works for me.

Thanks, Valve. You’ve done well with this.

Remember, you can read Laura’s impressions on the HTC Vive too. She’s got way more experience with VR than I do, and she still thinks the Vive is a game changer.