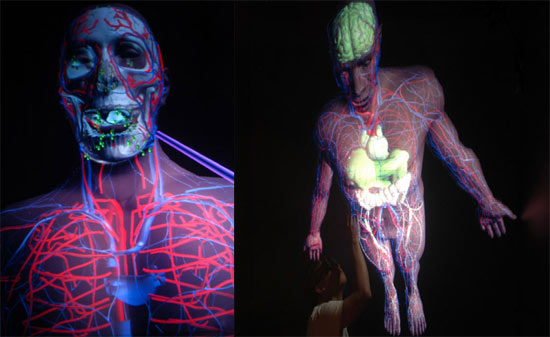 No, hospitals aren’t ripping off the game Trauma Center, they’ve actually been working on these medical projects for at least a decade:

Scientists have created a computer program that’s able to turn medical images into a full dimensional view of a patient’s body — inside and out.

The CAVEman (it’s rendered in a virtual reality room known as a CAVE) will provide not only a three-dimensional view of a body and its organs but also show systems in motion, such as the beating of a heart.

A few months ago I had the opportunity to work on a much more primitive “CAVE” located in a Pittsburgh hospital. It can be a little overwhelming the first time you step into the ominous optical room, but it’s an addictive experience that shatters your appreciation for large computer monitors and big screen televisions. The CAVE in Calgary, Alberta has just completed an entire adult male model, and they’re currently working on a female adult, as well as models for children and lab rats. If you’re interested in how the fancy headgear and advanced controls work, you can read the full article here on Discovery.