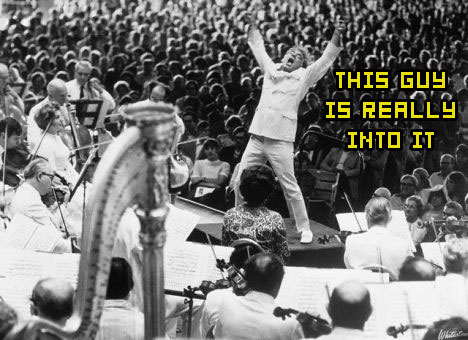 Your average FPS addict is sure to think this is the lamest game-related story next to a Mario cake, but here goes anyway: a homemade game called “Virtual Maestro” has been created by two US professors that allows you to conduct the London Symphony Orchestra using the Wiimote as your baton. The game was tested with audience members at a recent concert in London.

For those of you who love active rhythm titles, I’m sorry to say this is more of an experimental project than anything — the sponsors say there are no plans to bring anything like this title to the US anytime soon. In the meantime, if you want to see what it is like to conduct using the Wii, you’ll have to attend a LSO concert in London, as the game will only be set up for use before performances.

I love the idea, obviously, as I ravenously sucked up Nodame Cantibile DS as soon as it came out, but I guess I’ll have to wait a little longer until the idea comes to fruition for a spin conducting in my own living room.

[Via Yahoo! News — Thanks, Andrew]