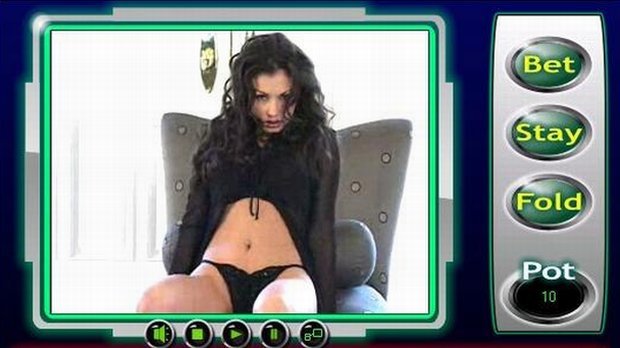 There are a total of four games coming out from Nintendo this week, but let’s be honest — the other ones are kind of shoved out of the spotlight by the fact that one of them is called Sexy Poker and was banned in Australia before somehow making it’s way onto WiiWare for today’s release. I suddenly feel like I’ve fallen into a time portal that dropped me straight into 1984. Is this happening?

Originally a mobile title from Gameloft, this WiiWare adaption of course tones it down so the racy action is limited to stripping down to lingerie instead of total nudity, but still … this is happening! On the Wii! It’s 500 points and has a mature rating, so if you’re curious you should download it just on the principle that it’s WiiWare’s first (and probably only) “sexy” title. By the way, the picture above is not from the game, but it does bring back lovely memories of all the hilariously campy sexy games I’ve played over the years.

Also available for WiiWare this week is Overturn, a robot fighting game that can accomodate up to four players. Virtual Console fans can also grab Tecmo Bowl for 600 points or check out Art Style: precipice for the DSi for 500 points. Seriously, though … I feel sorry for these other titles. How can you compete when you’re going up against Sexy Poker?

The onset of August means summer is winding down, but the downloadable action at the Wii™ Shop Channel and Nintendo DSi Shop™ just keeps on heating up. Two new WiiWare™ offerings deliver futuristic robot foes and sultry poker opponents, respectively. On the Virtual Console™, there’s great news for football fans as the arcade classic TECMO BOWL™ makes its way to the Wii system. And on Nintendo DSiWare™, you’ll find a fresh addition to the eye-pleasing, mind-bending Art Style™ game series.

OVERTURN
Publisher: Studio Zan Inc.
Players: 1-4
ESRB Rating: E10+ (Everyone 10 and Older) – Fantasy Violence
Price: 800 Wii Points™
Description: OVERTURN is a futuristic robot-versus-robot fighting game. Choose from eight different robots to pilot and master, using various close-range and long-range weapons to blast away enemies in six single-player tournaments. Unlock secret modes and up to 12 new weapons. Customize your robot’s color and weapons to prepare for your next battle. Then take the action online to play in a two-player Versus battle or a four-player Battle Royale match. Search the world for Friends or other players who are online and ready for battle. Players with the optional Wii Balance Board™ can use it to control their robots by shifting their weight.

Sexy Poker™
Publisher: Gameloft
Players: 1
ESRB Rating: M (Mature) – Simulated Gambling, Suggestive Themes
Price: 500 Wii Points
Description: Get your pulse racing with a game of strip poker against a selection of six lovely manga-style women who may wind up in nothing but swimsuits or underwear when the final hand is dealt. Choose the classic Texas Hold’em Poker to be thrilled as the bets increase, or try the Black Jack game for a mix of chance and strategy. Discover the girls’ personalities: they’ll bluff you! Enter the photo gallery to see the pictures you’ve unlocked by playing and winning. If you’re good enough, Emi, Sakura and their seductive girlfriends will bet their clothes to stay in the game.

TECMO BOWL
Publisher: Tecmo
Players: 1-4
ESRB Rating: E (Everyone)
Price: 600 Wii Points
Description: Released in 1987, the football game that took America by storm is back. This arcade version required a custom-made dual-screen cabinet and was popular for its large characters and intense graphics. The game is filled with great action as players take control of receivers and running backs, quickly moving the controller to break a tackle. Play alone or with up to four players in a two-on-two match. Experience the best moments of both competitive and cooperative play, finding holes in your opponent’s defense, then savor the thrill of receiving a pass thrown by your teammate. In addition, game options such as play time, team division and difficulty level can be adjusted.

Art Style: precipice™
Publisher: Nintendo
Players: 1
ESRB Rating: E (Everyone) – Comic Mischief
Price: 500 Nintendo DSi Points™
Description: The sky is falling in the form of cubes in the action-oriented Art Style: precipice. Watch for the telltale shadow to avoid seeing your character get crushed by a falling cube while climbing the stacked cubes to ascend to the floors above. Push, pull or shove cubes to make your climb easier. Try to gain extra points by stepping on five cubes in a row on the same floor. In addition, you’ll encounter special cubes that can either be helpful or harmful to your effort. Choose from either TEN FLOORS mode, which challenges you to reach the tenth floor while scoring as many points as possible, or TOWER mode, which gives you the chance to climb as high as you can. Do you have what it takes to make it to the top, or will you be crushed?

Remember that both Wii and Nintendo DSi feature parental controls that let adults manage the content their children can access. For more information about this and other features, visit Wii.com or NintendoDSi.com.