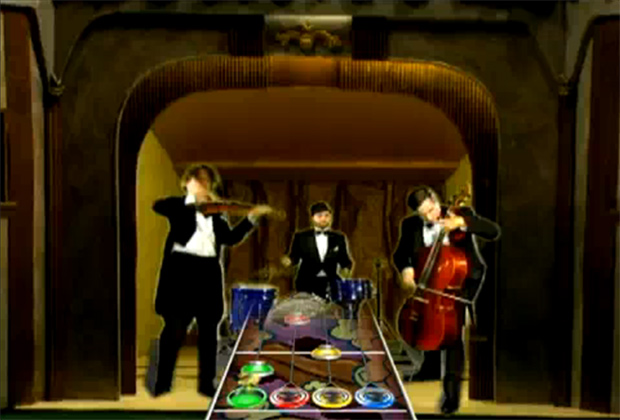 Let me answer your first question: “string metal,” also known as “cello rock” or “cello metal,” is a sub-genre of music that is exactly what you probably think it is — rock/metal music in which string instruments (like violin and cello) are featured as primary instruments. Now that that’s out of the way, we can get to the insane music video above, which was made by Los Angeles-based artist ‘ZZalgern0n’ for a song called “Cobra Strike” by the string metal band Judgement Day (yes, that’s how they spell it).

We’ve all seen plenty of parodies and other things inspired by Guitar Hero, whether they’re Christmas light displays or Hey Ash, Whatcha Playin episodes. You may right now be thinking, “Another Guitar Hero-based quote-unquote ‘funny’ video? Meh. Been there, seen that.” But if you’ve ever trusted my advice on, say, whether to buy a videogame, believe this: the “Violin Hero” parody above is definitely worth three and a half minutes of your time. (The music video’s song isn’t particularly offensive to the ears, either.)

If you hit play, you’ll see a frenzied, madcap video full of more blink-and-you’ll-miss-it sight gags than an episode of Robot Chicken. There’s President Obama’s proclamation that “there’s too much violins in videogames,” which holds true outside of gaming, too, considering the ubiquity of Violin Hero’s purple controllers. Then you’ve got terrorist training camp videos that show the bad guys learning how to use the four-button plastic instruments for evil.

And it’s all juxtaposed with footage of Judgement Day’s three members rocking out with their violin, cello, and drums, as well as shots of violin-crazed kids getting their fix. ZZalgern0n even threw in a nod to the infamous “N64 kid” at the beginning. Yep, Violin Hero is poised to become the hottest gaming gift of the 2011 holiday season (ohgodIhopenobodyfromActivisionisreadingorwatchingthis).

No wonder Paganini’s arrangement of Paisiello’s “Nel cor più non mi sento” is under tier 4, “Satanic Strings.” The piece sounds like it’d be damn near impossible to play on a plastic violin controller.