Over the last year and — almost — a half, Crusader Kings II has grown considerably. What started of as a vast grand strategy game where players could take the reins of a Christian noble dynasty now contains playable Islamic dynasties and merchant republics, a fictional Aztec invasion, and the ability to carve out empires, and that’s all great. But what I really wanted, right from the beginning, was to troll medieval Europe with a fleet of Viking longships.

With The Old Gods expansion, I’ve finally been able to do exactly this. Not merely a Viking expansion, however, The Old Gods introduces playable pagan dynasties all over the map and a slew of tweaks, improvements and new additions. It’s been difficult to tear myself away, and it might very well be Crusader Kings II‘s best expansion yet — it’s certainly the largest. 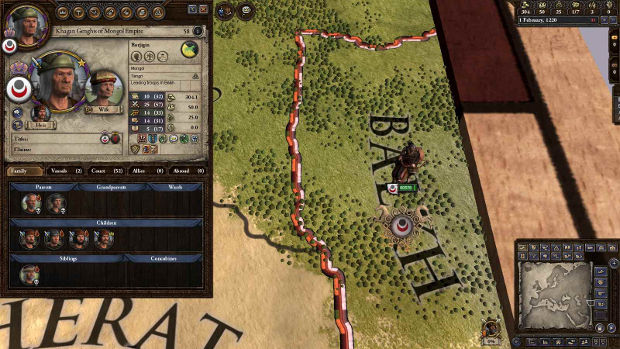 867AD, almost two hundred years before the Battle of Stamford Bridge and the Norse and Norman invasions of England — initially the earliest starting point in Crusader Kings II — and the pagans are restless. Petty kings and chiefs squabble ceaselessly; new nations are being created at the point of a spear.

The new start date in The Old Gods reveals a Europe and the Middle East markedly different from how it will look in two centuries time, and in that span many things can happen, so that the historical future where paganism was annihilated in Europe, and huge Christian and Islamic kingdoms dominated the world might not come to pass.

I’m more of a conniving Crusader Kings II player than an outright aggressive one. I try to avoid wars if I can, more at ease plotting, assassinating, and bribing to get what I want. That sort of play-style is the antithesis of how the pagan nations must be handled, however, and so I had to get out the war paint and start beating my shield. 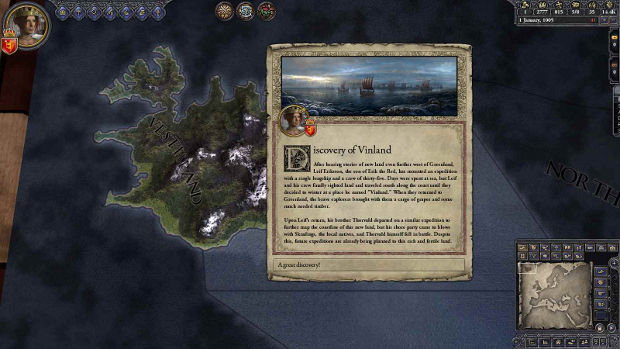 While the lords of the monotheistic kingdoms get all bent out of shape when a leader forces their troops into a prolonged war, the pagans demand a constant show of strength from their kings and lords. To rule pagan lands, one cannot shy away from a bit of bloodshed. This all contributes to a clusterfuck of warring tribal peoples, and I got more worried when my vassal armies weren’t raised than when they were knee deep in the blood of their foes.

Pagan aggression is not restricted just to wars, thankfully — because damn, can they be expensive — and raiding parties can be sent abroad to alleviate foreign regions of their wealthy burden. Raids are a novel new addition to the game, and are pretty simple to pull off, just requiring a unit to be set to raid (at the click of a button) and then sent to their destination by ship (if they are Vikings) or on foot.

Once the raiders arrive in a province, they must contend with any foes or fortifications before they start wildly looting, but once those things are dealt with it’s one big party. Eventually the holdings that generate gold will be drained for the time being, and the blood-drunk and slightly richer raiders can bugger off to their next target.

The Vikings, Europe’s most infamous pillagers, get some special advantages when it comes to stripping a land off its wealth, namely in the form of ships. They can go further afield, get more loot, and even travel down rivers into landlocked provinces to cause a ruckus. 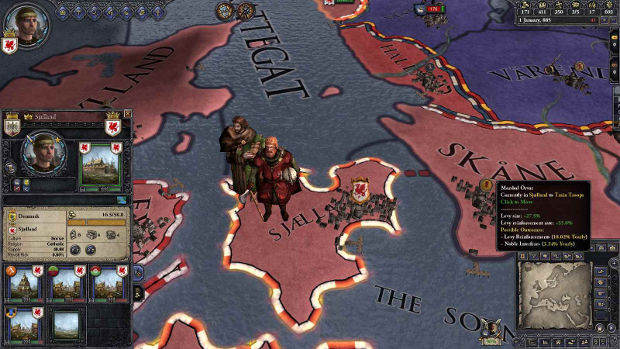 Once the fun is over and the raiding party has more gold than it can reasonably carry, they can be sent back home, bringing back both the gold and prestige. Military technology and fortifications will eventually lead to raids becoming more difficult, for instance river forts will start to make it impossible for Viking longships to make their way inland, so it’s best to take advantage of pillaging while it’s still possible.

In the 9th century, many of the nations that make up Europe had yet to be created, and one of the key ambitions of the pagan leaders (and some of the Christian and Islamic ones) is the unification of their land. Playing as King Haraldr Fairhair of Ostlandet, I was immediately able to select the ambition to create the Kingdom of Norway. Now, while Fairhair was a king, he was a petty king, essentially a powerful chief in charge of what amounts to a duchy. Historically, Fairhair became the first king of Norway in 872, so it’s not too difficult to make this a reality in the game.

By selecting this ambition I gained an extra-strong casus belli, the subjugation CB. This meant I could declare war on any of the Norse regions without a claim, leading a string of wars going on for many years. This being Crusader Kings II, nothing went quite to plan, and Fairhair died in battle and the area devolved into wars between his sons and uncle, as they all tried to make themselves King of Norway.

England and the various Saxon kingdoms and what would eventually become Hungary, at the time being ravaged by the Magyars, are two other areas that are ripe for unification, and there’s a clear push for these peoples to create these kingdoms, just as they did historically. 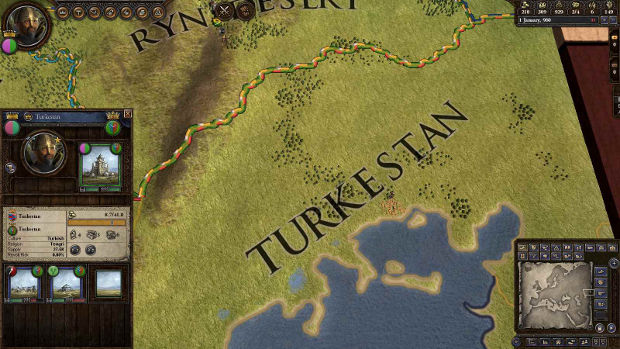 One of the most obvious differences between the pagans and the rest of the world — come on, it’s in the expansion’s title — are their religious beliefs, and just as they did with Sword of Islam, Paradox has made the heathen religions just as deep and full-featured as their monotheistic counterparts.

Complete with unique events and even sacrifices, they are quite the departure from the other religions, but historically they were unable to survive in the face of the Catholic and Celtic Church and monotheistic missionaries. As paganism died out throughout much of the world during this period, The Old Gods presents something of a “what if” scenario. Paradox had to invent away for these old religions to survive, and so they created the pagan reformations.

By controlling holy sites, a dynastic leader can start a religious reformation, organizing their pagan faith against the onslaught of the Abrahamic religions, and even allowing them to start holy wars and crusades. While it’s ahistorical, without these reformations they’d inevitably succumb to the larger belief systems, so this creates some balance.

Landed nobles get all the fun in Crusader Kings II, but what about the little people? The good news is that Eric Everyviking and his chums will get their time in the sun through more refined rebellions and landless adventurers. 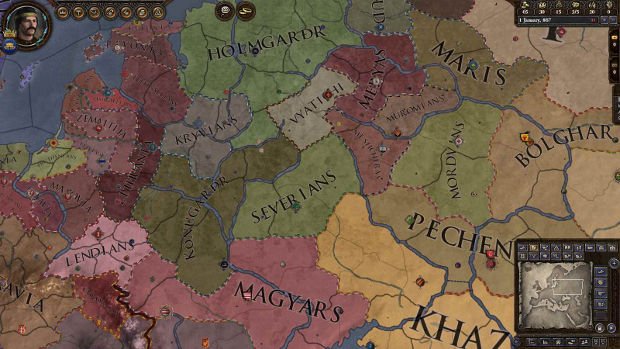 Instead of rebels being faceless dissidents, The Old Gods gives them a wee bit more character in the form of a face of the rebellion — a leader of the rebels who can, should their efforts be successful, claim land and titles. Rather than dealing with x number of troops, players will have to face a mob led by an individual with desires and ambitions.

Other characters lacking titles or claims will also crop up in the form of landless adventurers. In the spirit of near-legendary heroes who traveled to distant lands to carve out a kingdom (it’s sort of how the Normans came to be), these adventurers can strike out on their own and try to claim new lands, going from nobodies to men of influence. They might also join player armies before a great invasion.

Prepared invasions are a new feature where a lord can proclaim their desire to conquer new lands and wait for a couple of years as independent warriors flock to their banner in search of riches and glory. Such events have been retold — with no small amount of artistic license — by poets and bards, where groups of men would gather to feast and boast, their numbers swelling, until they finally went to war, such as in the important Welsh poem Y Gododdin.

Such invasions are time sensitive, however, and a lord that doesn’t follow through with his invasion plans will face dire consequences. The result is more meaningful wars, no longer simply a matter of raising vassals and marching them to a target. 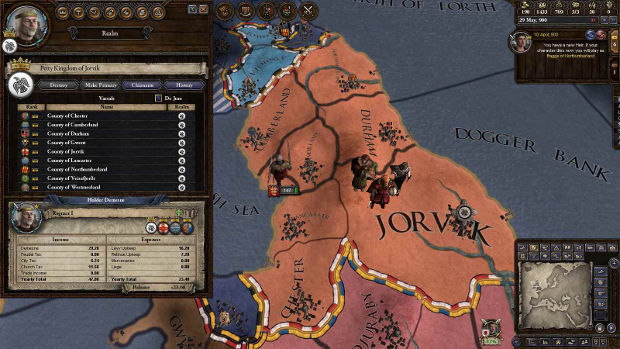 As with the previous premium expansions, The Old Gods also fixes and tweaks the base game, while adding new features for free. Those who don’t buy the DLC won’t have access to the pagan factions, but they will benefit from the reworked technology tree. It’s now significantly less obtuse, and it’s much easier to plan advances and unlock new technologies.

Although it’s convenient for me to lump all the pagans together for the purposes of this impressions piece, it’s not particularly representative of their actual diversity in the game. Even the various Germanic and Scandinavian peoples differ greatly, from the stalwart Finnish tribes to the aggressive Norse, they all play differently and will require a distinct mindset to successfully manage.

Further afield you’ve got the Persians who are still Zoroastrian at this point, and their faith and culture couldn’t be more different from their European counterparts. They, appropriately, aren’t even considered part of the greater pagan group and share similarities with the Abrahamic faiths that the Achaemenid religion inspired. A reformation isn’t necessary, as Zoroastrianism was already an ancient and organized religion, and Zoroastrian rulers can arrange holy marriages and create a High Priest position that functions a bit like the Catholic Pope.

When Paradox said that The Old Gods would be its biggest Crusader Kings II expansion, it really wasn’t kidding. It’s an altogether different experience from playing the core game, and it’s content rich. It also marks the end of what Paradox is calling the first phase of Crusader Kings II DLC. Pretty much all of the factions are now playable, and one can experience the medieval world from a plethora of disparate angles.