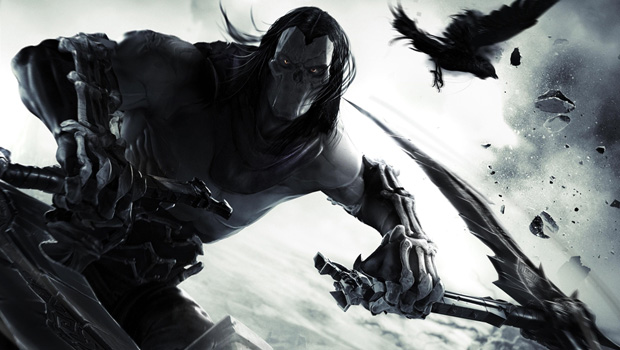 THQ has cleared its plate and sold off all its assets… well… not all of them. For some reason, not one company placed a bid for Darksiders developer Vigil Games, dooming the young studio.

Vigil’s lead combat designer Ben Cureton decided to pen his own farewell letter (posted below) and share it on gaming forum NeoGAF. But whereas the THQ company letter ends on a hopeful note, Ben’s is far more heart-wrenching, coming as it is from one of the talents getting tossed on the street.

He knows his stuff, so there’s no doubt Ben and crew will go on to bigger and better things. For now, let him express himself.

(Thank you for the notice, Squishy3)

My name is Ben Cureton, and I was the Lead Combat Designer at Vigil Games. I’m sitting at my desk among… what appears to be a warzone. The walls look bare. It’s quiet.

The seats are empty.

We’ve all been on edge for the past couple months… and more so, the last couple weeks. I mean, I’m sure you can imagine what it’s like to wonder if you will have a job tomorrow. Most of us here joked about it just to keep the mood light, but we all knew what could happen. Now I look around and I realize… it did happen.

Am I sad? Well yea. I’ve been in this industry for 20 years. Seriously. Two decades. I’ve been laid off more than once. It sucks every time. But am I sad I don’t have a job? Not really… I’m sure I’ll get another one eventually. I’m sad because it won’t be THIS job. It won’t be at Vigil. That’s why I’m sad. The people I waged war with are no longer together. The people that I bled with, vented with, argued with (often times LOUDLY), and kicked back with… these people will never be together again in the same combination.

Not that it was perfect. But what is perfect? Did I like coming to work? Yes. Was I proud of the work that I did? Yes. More importantly, was I proud of the work that WE did? Absolutely. I knew, without a shadow of the doubt, that the project we were working on (Codenamed: Crawler) was going to blow people away. In fact, it DID blow people away. We did, in TWO months, what many companies haven’t done in a year. The pride of knowing that no one was doing anything like us was so satisfying, it kept us coming to work and giving 100% every single day, even through the dark times.

… so maybe you can imagine what it feels like when you read the list of who bought what only to discover your name is not on the list. Why? Did we do something wrong? Were we not good enough? Were we not worth ‘anything?’ Imagine that.

Their seats are empty.

It’s OK, though. I guess this post makes it sound a bit melodramatic. Seriously… if you work in the video game industry you have to be resilient. Doing what you love often comes with a price – anyone who has been around for a while can tell you that. Today, that price has been paid. That being said, I’d still never dissuade anyone from following their dreams if their dream is to make video games. While it’s not as romantic as it sounds, it’s sure a hell of a lot of fun.

So don’t cry for the people at Vigil. We made games for game players. I have no Horror stories from working here… only Honor stories. Through both praise and critiques alike, our goal was always to make a product as if we, ourselves, were the end-user. We may have gotten pushed and pulled in certain directions by forces out of our control, we were always in it to make games for game players. And that’s what we did.

I can only hope that those spared from the other companies remain employed long into the future. There is not much worse than false hope, and these people deserve to continue making great games. You may not know their names, but they exist, and they bleed, sweat, and cry for your entertainment. I mean that honestly, with no negativity. They do it… no, WE do it… because we want you to have a good time.

In closing, I can only say thank you to the fans of Vigil games. Your support means more than you can imagine. Your feedback (both positive and negative) gave us long-lasting insight that we will all take with us, wherever we may go. You are the reason we made Darksiders 1 &2… and you are the reason we will continue to make games.

And with that… my seat is empty.

P.S. This is no place for a horse.