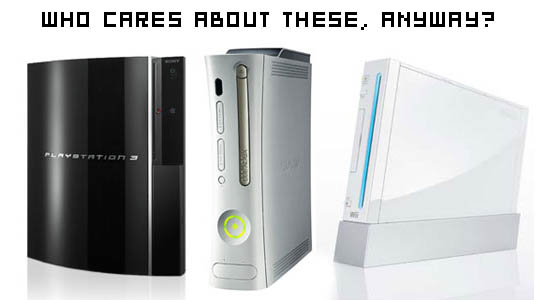 For gamers, it’s easily to take the “waste of time” attack personally, and that’s why it was nice to see some of the very smart responses given to a post called “Couldn’t Care Less About Xbox 360, Nintendo Wii and Playstation 3: Am I Really Missing Much?” by Lucy from Product-Reviews.

In this post, Lucy says that she doesn’t get why people are so passionate about what console is the best, or why gamers will talk endlessly about what games are the best. She really wants to know what all the fuss is about.

Why are people so passionate about which console is better, which games are better when really it’s all a waste of time? By not taking an interest in the three above consoles is my life seriously lacking something?

While it would have been safe to expect an all-out, flame-filled string of fanboy attack responses, most of the 70 or so replies are actually somewhat focused and informed. They range from a general defense of gaming to a precise answer to “what the fuss is about.” While I don’t necessarily agree with some of the views, and a few go way into left field, it’s nice to see this collection of mostly well-informed responses to a question that is so close to flame bait that it’s in danger of combusting.

Hit the jump to see some selected responses.

What you did by going on the internet and stating that games are a waste of time is very similar to going to a museum, or an art exhibit and stating quite loudly that everything in the building is absolute garbage, than asking for the people there to try to convince you otherwise. Putting people on the defense is not usually a great way to get the best information. It is amazing how imagining somebody else on the other side of the screen changes how people can communicate.

Kirk’s a bit defensive, but I like his angle. Read his whole post for the long answer.

I don’t personally give a toss about make-up, or shoes, or foreplay, or geography, or history programs, or politics, or The Beatles or Martin Luthor King, but at least I am not so ignorant as to even make the claim that I don’t understand what all the fuss is about or especially to state that it is all a waste of time.

Different things matter to different people for a billions different reasons, and YES I will frikin defend vidogames till the end!

Those in favor of a more passive approach:

This response from will is a bit sad, but still valid:

I play games because I live a sad pathetic life, anything that takes my mind off that is a good thing. Since games are interactive, its an easy way to get swept up in something so I can kill more time without thinking about how sad I am. That way, it will seem like a shorter amount of time till I die.

I feel the same way when I hear people talk about other things, like the latest pop music gossip, the Super Bowl, or even the World Series.

Come on, it’s just some guys running around, playing with a ball and a bat.

Just like every other form of recreation, in the end, you could just call it a “waste of time”, but the truth is we all need to PLAY, to turn on our imagination and engage our creativity. It’s how we explore and learn about ourselves. And if you don’t see that games are just as vital and powerful in that effect as music, movies, sports, etc… then you are probably just a different fanboy.

The arguments stem more from fanboyism than anything else. No, the systems themselves aren’t that big of a deal. Your personal choice or interest will depend in the same way as it applies to anything that interests a person. If you buy a car, you buy one that’s best for you, and that pretty much revolves around budget, horse power, driving conditions (i.e. long daily commutes, city driving, etc.), and what have you. Only fanboys or aficionados would argue in detail “which is better.”

If you’re indifferent with videogames, trust me, you’re not missing much when it comes to the arguments because for the most part it is all subjective. This isn’t arguing over the positives and negatives of a medication. You don’t learn anything applicable outside of learning what you like, and that’s difficult to assess based on what others say they like. You might find some nugget of info that might make you pay notice and gain interest to a certain title, outside of that it’s all you. You see what you like, you read about it, and if it interest you, you buy it or try it.

What’s the fuss with all the arguments? Well, if there’s anything worse than arguing with fanboys, it’s arguing with fanboys in a supposed intellectual level with supposed “logic” thrown around. Seriously, what idiot would actually try to reason to another why they shouldn’t have so and so game when the latter requests for it on their system. It’s like kids trying to get the same toy in a toy box and one of them says “I’m sorry, but you’re not mature or hardcore enough to appreciate this G.I. Joe.” Even if there were two separate Joe characters to play with the former would still argue that the latter can’t play with any G.I. Joe. And that my friends is simply based on pure self serving greed. It’s as simple as that. Sounds like age old typical human bullshit logic if you ask me. Racism, sexism, religious fanatics, etc. pretty much stem from the same superiority complex.