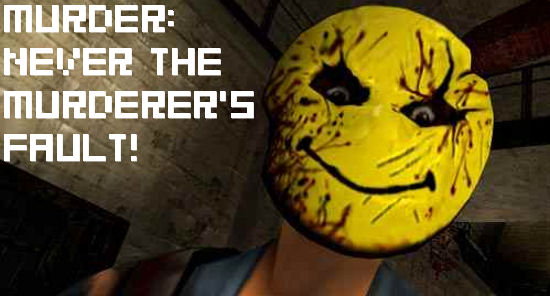 Stuart Harling is an 18 year old murderer who was convicted of stabbing nurse Cheryl Moss 72 times. An open and shut case, really — the guy’s a killer and deserves his time in jail. Of course, for the mother of the sicko, it’s not that simple. Something other than the guilty party HAS to get the blame, and naturally, she has used videogames as the scapegoat.

“Stuart was 11 or 12 when I bought him the PlayStation. For a long time I didn’t even realize games had age limits on them,”  griped idiotic Lorraine Harling, confessing her sheer ignorance. “We’d just buy him the game that all the other kids had. I didn’t really know what they were about. I think most parents are the same.”

Pathetic dishrag newspaper The News of the World ran a typically sensationalist piece on the murder and its non-existent link to games, capitalizing a ridiculous amount of words for scaremongering effect: “One of baby-faced Harling’s favourite games was the notorious Manhunt, where players SLASH and SLICE their victims with meat CLEAVERS, cheese WIRE and CHAINSAWS, or suffocate them with plastic bags.” I love how they call him baby-faced, as if to try and claim that Stuart Harling would be a blessed angel were it not for those EVIL games full of WIRE and CHAINSAWS!

“I know these games are played by kids across the world, but some are truly horrific. And if they can cause a trigger to be pulled in someone’s head they should be banned,” Lorraine added. Yet another young kid goes mental and kills, and yet more excuses are made for him. People wonder why criminals re-offend? We make them feel like they’re the poor victims.