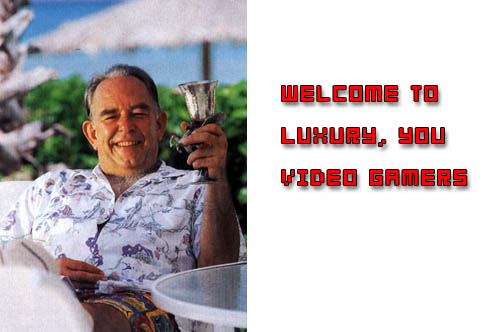 I’ll be the first to admit that it’s easy to lose perspective when you spend days writing about, talking about, and finally playing video games. Katamari Damacy’s creator Keita Takahashi hasn’t lost sight of anything, and he used his keynote speech at GameCity to remind his audience that there is more to life than videogames.

“It would be impossible for us to be here… if the world was not peaceful. If there was heavy fighting or pollution in the cities could we talk about video games like this? If you’re suffering from poverty and disease could you worry about collecting coins? I don’t think so,” he said.

“I might be being idealistic but I truly think so. Video gaming is good but it’s also a luxury. You can’t play videogames unless you are financially well off,” he added.

I get the guy’s point, but really, if video games were a luxury, then someone needs to send over Robin Leach to my house.

The Gamesindustry.biz post says that Takahashi spent the rest of his time on stage bashing his old game, Katamari Damacy (apparently he’s “sick of Katamari Damacy“), and showing off his new one, Nobi Nobi Boy.

Filed under... #Katamari Damacy#Living the dream