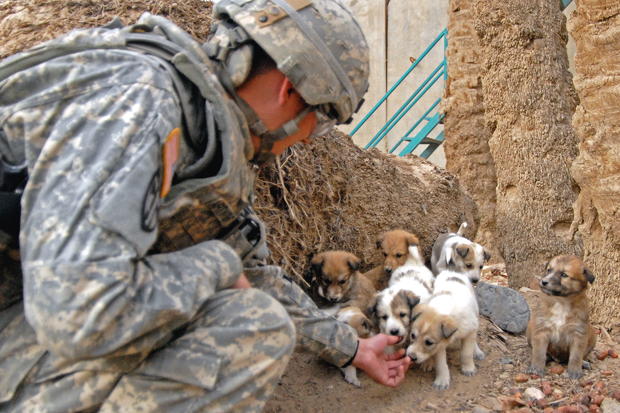 Do you remember the television program Studio 60 on the Sunset Strip? Likely, you don’t. It premiered on NBC (you know, that network notorious for running great programs into the ground) in 2006 with a truly stunning pilot episode. Its opening minutes are some of the most honest and intense moments of entertainment in recent memory, absolutely crucifying the now-tepid Saturday Night Live, network television, and television audiences in general. I would ask you to watch a short clip here before continuing to read.

Wonderful, right? Then something happened. The show tossed aside the sharp sword it initially wielded in favor of an olive branch to viewers, saying, “We fixed everything! Isn’t television great again?” It wasn’t. In reality, it proved exactly what was wrong. We think we need olive branches. Really, we need sharp, angry swords.

The videogame industry desperately needs swords, as well. In the face of recent controversies like Medal of Honor, it’s easy for anyone truly involved in the medium to see the state of the industry from both inside and out. It’s seen as offensive by those who don’t understand it and untouchable by those within. We think everything is right; they think everything is wrong.

In this scenario, everyone loses. We are all losing right now. Strangely, this four-minute monologue from a failed television program is as applicable to videogames as it is to network television. There’s a whole hell of a lot wrong.

In the monologue linked above, do you notice that as Wes delivers the opening lines in his angry tirade, the audience continues to laugh though nothing is funny? He struggles to convince his audience that this is not part of the sketch, but they continue to chuckle just as they do every night. “I know it seems like this is supposed to be funny,” he says, “but tomorrow you’re gonna find out that it wasn’t.”

Comedy is not the only issue. Sure, the show isn’t funny, just like Saturday Night Live hasn’t been funny in a long, long time. The problem is that the show isn’t good (we’ll get to that later), and the audience applauds and laughs along like zombies.

There are too many times when we, the consumers of videogames, engage in the same behavior. We clap along to the comforts we grew up with, failing to see that we’ve forgotten what exactly we’re clapping for. We celebrate things like the inclusion of Taliban insurgents in Medal of Honor because we believe them to be advancements for the industry.

They aren’t. And when the dust settles, we’re going to look back and say, “I know that was supposed to be great, but it wasn’t.”

The Taliban in Medal of Honor does absolutely nothing for the advancement of videogames. It affects the game’s quality in no way, appealing only to those who feel a need to hold signs protesting the release of the game or those who feel the need to mock those protesters to legitimize a pointless inclusion in a videogame.

But it works, and that’s our fault.

We aren’t asking for the right advancements out of our videogames. Yes, our games tell longer stories with more epic music and better gameplay, but these demands are implied and unending and stand as nothing more than white noise. We have controversies like sex scenes with aliens that get people angry and give us a reason to call people stupid, but each controversy comes and goes with nothing to show but a tally etched in our memories either as a victory or a loss.

So, what should we be asking for? Let’s return to Wes’s monologue. He laments the current direction of the show, which he states “has gotten lobotomized by a candy-assed broadcast network hell-bent on doing nothing that might challenge its audience. We’re about to do a sketch you’ve seen about five hundred times. It’s just thrown in the towel on any endeavor to do anything that doesn’t include the courting of twelve-year-old boys — and not even the smart twelve-year-olds. The stupid ones. The idiots, which there are plenty thanks in no small part to this network.”

Here’s the thing: absolutely everything said here can be applied to videogame publishers, developers, and, well, twelve-year-old boys.

Gameplay challenges are fine, yes, but that’s not the only way to challenge your audience. Games too often feel like they’re developed for twelve-year-old boys who have no intention of developing intellectually past that age. We’ve become too content with games and game series like Gears of War that continue to offer the lowest common denominator of quality: passable gameplay, pretty visuals, and ridiculous gore. Otherwise, it’s the same thing we’ve seen five hundred times.

But this is what game developers and publishers have come to expect. The industry rewards the lowest common denominator because it appeals to the widest range of consumers. I enjoy Gears of War because it looks and plays nice even if I leave the experience with nothing of any true value. Twelve-year-olds, the stupid ones, the idiots, play Gears of War because they connect sawing enemies in half with quality.

In 2008, LittleBigPlanet was delayed by a week to remove a song that contained lines from the Qur’an. We all remember Grand Theft Auto: San Andreas and Hot Coffee. Game publishers are paranoid about controversy — at least the type that doesn’t quickly and easily make money.

As for the beneficial controversies? In videogames, we have none. The closest industry example I can think of is the firing of Jeff Gerstmann, which made many of us question the current structure of videogames journalism, leading us to new outlets for our industry coverage. I know it did for me. It made me think, and it made me change the way I experience games coverage.

But the industry itself lacks guts. Six Days in Fallujah lost Konami as a publisher after questions were raised concerning its appropriateness. No publisher has been willing to touch it since, nor has any developer been willing to try something similar aside from Medal of Honor. “Guys are getting killed in a war that has theme music and a logo,” Wes says in Studio 60, and from what we’ve seen so far, Medal of Honor doesn’t rise an inch above that.

It takes guts to make a videogame set in Iraq that comments on whether it was a mistake to start the war in the first place, something that Atomic Games (developer of Six Days in Fallujah) was very adamant about the game not doing. It takes guts to make a gamer think about something important. It takes guts to buck the trend of feckless attempts at controversy that take the medium nowhere and half-hearted moments of meaning that are underdeveloped out of a fear of consumer alienation. So far, no company has shown us that it has the guts necessary to make something truly powerful.

The videogame industry is already incredibly influential as an entertainment industry, but its power is far greater than what we have seen. A game in the hands of an idiot twelve year old or an idiot 25 year old is a piece of entertainment with no less efficacy to provide meaning than a book, film, or television program. It has infinite potential to provide historical commentary, social and political satire, and riveting entertainment. We may think that we don’t want games to do this, but it is a game’s responsibility to make us want it.

We all just need to have the guts to make it happen.