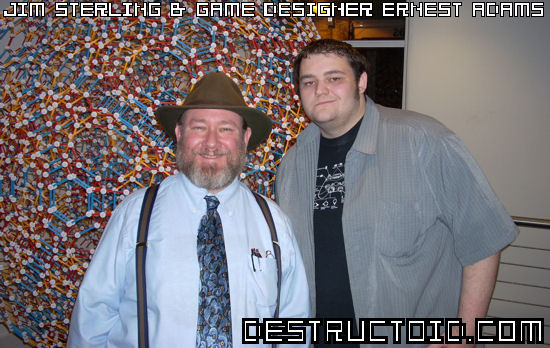 Videogames and Art is a new book that looks at works of art inspired by gaming. Edited by Andy Clarke and Grethe Mitchell, it’s a collection of writing on the subject and includes interviews with the likes of Brody Condon and Julian Oliver, who are probably a big deal and known by intellectuals.

Community member Wardrox and I went to the London Knowledge Lab where the book was launched with a collection of talks from artists John Paul Bichard and S.E Barnet, as well as conceptual musician Paul B. Davis and games designer/writer/teacher Ernest Adams. There was also a bonus talk from a really rude Polish guy. I think he was Polish.

Hit the jump for my artsy fartsy thoughts.

After I drank the free booze, convinced it would come in handy, and schmoozed a little with artists while pretending I knew who they were, the talks began with John Paul Bichard, an artist and lover of games who has produced several works inspired by our favorite hobby. His artwork involves turning the game space into a real space, which often involves recreating a videogame scene in real life. He prefers to call the videogame world a ‘parallel reality’ as opposed to a ‘virtual reality’ and tries to reflect that in his pieces.

After showing works from his Evidencia series, in which he recreates the aftermath of a videogame session as if it were a real scene, Bichard showed us a performance art piece in which a first person shooter was brought to life. Everybody liked this a lot. I was bemused.

S.E Barnet introduced us next to her collaborative work with Hilary Mushkin, Mario’s Furniture. Part installation, part game, Mario’s Furniture requires two players to work together to arrange furniture in front of a camera. With sensors in the furniture, the player can sit down to score points provided the furniture is arranged within the camera’s view. While this goes on, the other player arranges miniature models of guests in front of the camera as well. The trick is that the camera is constantly moving, creating a fast paced game of rearrangement.

This was far more enjoyable because of the bright colors and footage of people looking like idiots. I may not know art, but I know that I like to laugh at people. For the record, there was no Mario involved with the piece at all. None whatsoever.

Paul B. Davis would be the third speaker, the co-founder of Beige Records. He talked about his use of hacked NES cartridges as works of art and showed several of his pieces that involve using the code of a cart to produce a variety of images. It was at this point that several young children who had been running around made their foul way into the room and start nattering and pointing at Wardrox’s yellow hair. It put me off.

For me, the highlight of the evening was Ernest Adams who actually was the first to stop talking about videogames and art as seperate mediums and actually discussed the merger of the two. While I did not agree with everything he said (and hope to talk to him for Destructoid in more depth on these matters soon), Adams made some excellent points. He discussed what the games industry needed to do in order to be taken seriously as art, from truly striving toward artistic as opposed to monetary goals, recognizing games developers as creators and having more than just a handful of famous names in the industry.

He pointed at videogames as an evolution of boardgames, citing this as part of the struggle of videogames as an art form (whereas movies came from the stage, a more ‘artistic’ medium). While he believed that videogames could and would be taken seriously as art, he claimed that 90% of what we currently have on the market is not art and games companies would need to do more if they wanted to change that. He also said that instead of mere reviewers, videogames need critics — inviduals who know more about the cultural impact of games and aren’t just wannabe developers with few literary skills. Having chatted to us beforehand, he seemed to delight in pointing at Wardrox and I with a smile as he spoke.

With Ernest Adams finished, we were ready to go but then this other person who might have been Polish started. He seemed really rude and annoyed that he was squeezed on at the end, then started rambling about Jet Set Willy while something truly garish and loud played in the background. After ten minutes, he basically said “this is your culture, I don’t really care.”

After that, Grethe Mitchell said we all had to leave the building but they were going to a pub named, ironically, The Perseverance. Needless to say, we went to a different pub.

Videogames and Art may well be a very interesting book for highbrow gamers everywhere. Hopefully I will be receiving a review copy from the publisher soon and can provide an in-depth review. Until then, I stand by my theory that videogames are indeed art, but let me tell you, I sometimes wonder if that’s a noble goal to strive for.