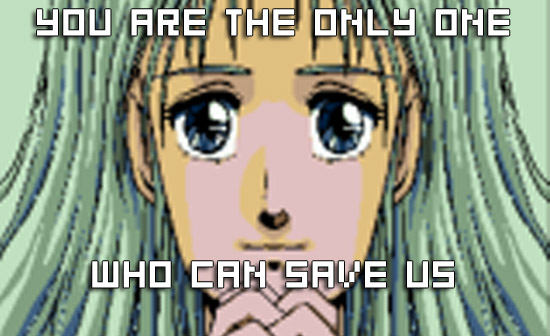 I am the Hero of Legend.

Long have been my travails in a vast and mysterious world, an environment largely hostile to me. When I departed the tiny, peaceable village where I spent the whole of my childhood as a mere farming boy, armed only with a sword and shield made of wood for which I was charged 100 gold by the inappropriately cheerful blacksmith whose very future rested squarely on the shoulders on my success and mine alone, I found the vast, unfolding landscape unexpectedly hostile. Here, even the birds behaved as if possessed by a mysterious mathematical evil, forming neat ranks and hovering, impossibly in line, and taking precise turns to attack me with vicious swipes of their foul beaks.

In the outside world, the crows, the wild pigs and even the tuberous root plants are possessed of elemental magic power. Would that I had known this as I toiled on my humble little farm!

But alas, the days of lamentation are behind me; now is the time of action. Hit the jump to read more of my epic tales of legendary heroism.

I was confronted with endless legions of aggressive wild animals standing between me and my goal — namely, the destruction in combat of the maniacal fiend who threatened the well-being of all humankind with his foul dreams of magical purgatory — and my wooden weaponry was woefully inadequate. Having emptied my poor little purse of all its coin on such crude stuff, and as the humble townsfolk who depended on me completely allowed me to depart in destitution, I was at a loss for a strategy whereby I might accumulate more gold with which to buy equipment.

To my good fortune, the wild beasts of this godless region were inexplicably wealthier than I. When I dispatched a vicious, fire-casting pig into a thicket of grass, at first it was morbid curiosity — and perhaps a bit of hunger — that led me to tread softly into the tall weed to look over the body. To my shock, the freshly-slain game which I expected to overlook had disappeared. In its place, a tidy stack, neatly sorted, of gold and silver coin!

And there would be more surprises yet. I would not have believed it had I not seen it with my own eyes, but in my travels I began confronting evil rabbits who carried weapons in their fur, bats toting clandestine blades in some invisible compartment of their tiny, rodentine bodies.

At first, I brimmed with gratitude, laden with a truckload of goods that I somehow accommodated in the pockets of my Cotton Shirt. But as my appetite grew fey and I felt a minor gastric earthquake sounding the knell of my near-starvation, frustration set in. A succulent cow, with a haunch to make the mouth water, doubtless a source of endless steak, even if I must devour it raw! But when at last I had the creature slain, I was pained to see its body dissolve before mine eyes into an odd, bloodless smoke — leaving behind only a tiny vial of poison antidote. I suppose that I was grateful to have it, as I saw the tinge of venom gleaming on the end of a fang or two on my way — but how I would have preferred a meal!

Starving and weak, I finally arrived in a new village, where I was greeted as a hero. The townsfolk stood just outside the doors to their home, or stood stock-still in the corners of the town square from sunup to sundown, so arrested were they by the sight of the Hero who was destined to bring their salvation. I begged for food, for bandages, but smiling shopkeepers again held out their sinful palms and demanded recompense. I seized a woman by the shoulders. “How am I to save you all if you will not aid me? I haven’t the coin for such services!” But she only repeated the same phrase, again and again, as if she heard me not.

The Hero of Legend. Chosen by the Gods for his distinct moral purity. Not just a consequence of youth, but of a stellar, singular brightness of conscience. The Oracle told me that an individual as pure and noble as I is born only every 1,000 years. My purity and honor walk hand in hand with my destiny as the savior of all.

Imagine my inner disgrace, then, when I found myself slashing the lawns of the townsfolk, their cultivated berry bushes, scavenging the hidden fruit and coin these good people had stored close to the earth outside their homes. Into their houses I pounded, harassing them at their dinner tables. I mounted their stairs without invitation to search the annals of their bedrooms, rifling drawers, peering under beds, not even halting at the threshold of their children’s bedrooms. I smashed crockery, I tore open the treasure chests of their dearest belongings, sitting in their hallways and kitchens, prizing their contents for my own.

My pockets filled, I returned to the town square. The cobbles were littered with the pottery I’d smashed; I’d left every domicile an overturned ravage, drawers hanging open like the gaping maw of sin, empty lockboxes mocking their owners’ sense of security. What had I done? The townsfolk all stood as I’d left them, watching me. “You’re the only one who can save us,” murmured a small girl, just as she’d done on the morn of my arrival in that cursed place.

I confronted them all, demanding to be held to account for my crimes. Privately, perhaps I wanted their permission to take their goods; their apology for leaving me so woefully unprepared, for levying heavy costs my way for serving them at great risk to my person. But they said nothing; they went about their business as if nothing at all had occurred.

I stood alone in the barnyard. I lifted a chicken, set her down again. I pet a cow, and heard its lowing moo. Stroking the farm animals thoughtfully, I wondered why they’d failed to notice my razing of all they held dear; why they failed to question me, why they failed to support me. Idly I chased a cat all through the town. I loved to hear her mew. And none was moved; they regarded me beatifically. They bid me farewell as I left, warned me about bandits on the highways.

I, the Hero of Legend, followed the endless winding road to my destiny, unless a large boulder sat squarely in the center.