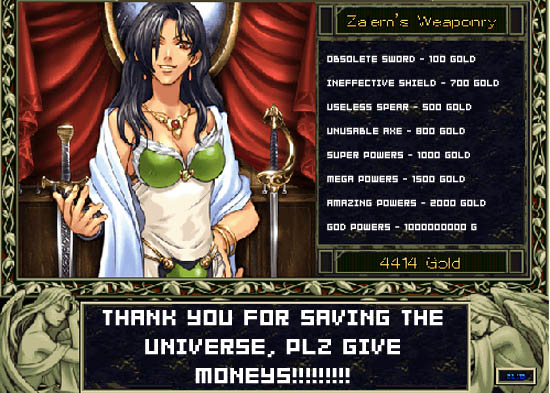 After 1,000 years, the Dark Lord has, against all odds, re-emerged into the world.

We hadn’t thought it possible. Our people had, through a use of time- and space-rending magical power, with the aid of a great celestial coincidence and a sentient, priceless artifact, sealed away the threatening power, never to return. Alas, the utopia in which we thrived for generations is now threatened again by the encroaching of that dark power, summoned by a darkly insane harbinger, a madman with the goal of purifying the world through its destruction.

And of this genteel, utopian race, previous possessors of untold magical gifts, I, an ordinary fifteen-year-old boy, am the only one who can stop this evil.

Hit the jump for my magical, powerful, not-in-any-way-derivative tale.

One day I’m peacefully farming, attending school, courting the plain-but-cute local girl, and in a heartbeat, I am thrust into my inexorable destiny. I am not afraid or even perplexed, but willingly commit to the cause. My journey will take me across great distances, put me at the mercy of fearsome, legendary beasts and send me to confront alone the aggressor that threatens all life as we know it. When I step out of my humble hut, blinking in the blazing sun, I am greeted by my entire village, their eyes turned on me and me alone with hope, joy and shining gratitude. A local woman took my arm and whispered breathlessly, “You’re the only one who can save us.” Clutching her babe to her breast, she looked desperate — I knew that the future depended on me.

“It’s too dangerous,” said a strapping former soldier dubiously. “You haven’t even the adequate supplies.” And it was true. But a stripling of a youth, I had not magic spells nor equipment with which to confront the great evil I had been tasked to defeat. And should a beast rend my body with its vicious teeth, should the villain strip my flesh with his magical abilities, so arcane as to defy the laws of physics, I had no recuperative salve, not so much as a bandage to succor me.

All of the villagers stood dispersed about the town to watch me depart, some standing by their houses, others marching solemnly in place alongside the gate. They were gathered for my farewell. I knew that in their hearts, they feared I wouldn’t return, and that their hopes for salvation would be dashed along with my bones on the harsh stone of an undiscovered continent.

I entered the local shop; the armorer and the medicine man worked side by side, at adjacent counters, for are not death and healing distant cousins? Is not medicine the brother of war? “I need a weapon,” I told the shopkeeper, my young voice breaking. “I need arms with which to save the world; please, for our village’s sake, for the sake of humanity, give unto me your strongest, most magically-endowed weapon.”

The swordsmith looked down upon me, a wealth of armaments glittering in glass cases over his head. And, mute with the magnitude of his gesture — after all, he was bestowing upon the world’s hero the tool by which he would expunge evil from its face — he lifted down a massive, blessed steel from its rack and set it upon the countertop. I met the eyes of the assembled, the patrons who gathered in the shop to share news and to observe my departure. This was the moment. I lifted the sword.

“That’ll be 200,000 gold,” the shopkeeper told me, the grin on his face incongruously cheerful despite the mortal peril we all could face at any moment. “But I am the hero of legend,” I protested. Surely he had mistaken me, but his steely gaze would give no compromise. And in my pouch, a feeble 200 coins. “I can pay you back after I save the world,” I told him, bewildered, but he would grant me no such extension. Frantic, I sought to inform the locals of the shopkeeper’s lack of cooperation with our common goal. Perhaps he was in cahoots with our mortal enemy! But the villagers would not acknowledge the injustice, talking only of their crops, of their children, and of rumored secret areas in the local caves.

“I need money,” I told a local man. “My journey is not yet begun, and I am inadequately equipped.” Finally, I could see by the light in his eyes that he would consent to fund me against this ludicrous charge — but my problems were not yet through, for he demanded a series of improbable errands. Milk for his child? The retrieval of his lost cat, the mowing of his lawn? For shame!

For 100 gold, I received a model sword with a blade of wood. “Come back when you have more money,” the storekeeper told me, “and thanks for saving us.”

Later, when I stumbled forth from a brutal cavern wherein I was certain I’d meet my end, my life flashing before my eyes, I dragged my broken body, depleted and bleeding, into another nearby village. Again I was greeted with warmth and gratitude. The noble hero. “Take care in the caves,” they warned me. Into the hospital I stumbled, I the boy who would salvage humanity, and begged a physician to patch my broken bones. “300 gold,” he proclaimed, “for you, hero.”

Fie on these capitalists, with their eyes always on the bottom line, even as their own lives lay in peril! Mayhap my adventure is thoroughly doomed!

Stay tuned for the next episode of Videogame Conventions, following a lengthy hi-res anime-inspired cutscene.