Bowie’s face is a paradox

[From our Golden Archives: here’s our most popular story of the day back in 2009. -N]

David Bowie, born David Robert Jones on January 8, 1947, is an English musician, actor, producer and arranger. Having been active in the entertainment industry for over fifty years with a staggering amount of success, the “man who fell to Earth” has had an undeniable influence on a great many people.

Many videogame characters also look like him. A bit.

Balthier is a 22-year-old Hume sky pilot who, in Final Fantasy XII, pilots an airship known as the Strahl. He also looks like David Bowie.

With the swept back hair and relatively un-flamboyant look, at least as far as Final Fantasy characters go, Balthier resembles Bowie as he was in the early millennium, particularly with the release of 2002’s Heathen album. You’d actually be surprised by the sheer number of Final Fantasy characters that look like David Bowie, of which we’ve included but a fraction in this article. Still, I think you’ll find that Square Enix has been quite rightly represented.

Eva made her first appearance in Metal Gear Solid 3: Snake Eater, then a young woman, and a double agent who helped Naked Snake complete his mission. In MGS4, Eva returned, significantly older and operating under the codename of Big Mama. She also looks like David Bowie.

This is a similarity we have actually pointed out before, but it needs to be repeated that Eva as she appears in MGS4 is a dead ringer for the modern David Bowie. The sort of crusty, slightly monstrous creature that he is today. It’s the kind of old age that tells you the person was definitely attractive once, but that very fact has made look somewhat creepy in later life. A living paradox. Bowie’s face is a paradox.

Poison is a famous videogame character from Capcom’s Final Fight series. Originally conceived as a woman, the American release of Final Fight saw Poison relegated to the status of crossdresser, since it wasn’t considered “cool” to hit women in America, much to Ike Turner’s surprise. Poison has since gone down in history as one of gaming’s most notorious transgendered characters. She also looks like David Bowie.

Our very own Niero nominated Poison for the list. The red hair and tight fitting clothes certainly make her a worthy contender, and since the only other character fit to represent Ziggy Bowie, we stick by our choice. While Kratos’ facepaint is spookily Stardustesque, Bowie’s hair is too legendary for us to have a bald man on this list. We take our work far too seriously for that.

Kefka is hailed not only as one of the greatest Final Fantasy villains, but as one of the best videogame villains of all time. The maniacal clown of Final Fantasy VI gained noteriety for such diabolical acts as poisoning an entire village, and generally being a nihilistic psychopath with a hatred of all things. He also looks like David Bowie.

Kefka looks very much like Bowie in his clown getup for the video and promotional material of hit single “Ashes to Ashes.” While Kefka has never rounded up all his New Romantic buddies from the pub to walk in front of construction equipment for a few hours, I think he would have … if he wanted to.

Albert Wesker is the treacherous villain from Capcom’s Resident Evil series. A sinister double crosser who will stop at nothing to gain power and influence, Wesker has exploited everyone in his shady dealings with Umbrella, the T-Virus and Las Plagas. He also looks like David Bowie.

Wesker most closely relates to Bowie’s soul-influenced alter ego, The Thin White Duke, with slicked back hair and smart, dark attire. It also helps that Wesker blatantly sounds like David Bowie as well. In fact, I’d go as far as to say that Wesker is David Bowie, and nothing you can say will prove otherwise.

Liquid Snake is the villain of Metal Gear Solid, and one of Solid Snake’s most hated rivals. A clone of legendary soldier Big Boss, and believing himself to be genetically inferior to his brother, Liquid is a tragic figure, whose sense of jealousy and rage sought to ultimately be his undoing. He also looks like David Bowie.

With the long hair, Liquid can only resemble Bowie as he looked right back in his formative years, and we have chosen “Space Oddity” Bowie as the likely match, though really any long-haired Bowie will do. They also have the English connection, which is very important, as well as both of them being as camp as Christmas.

G-Man is one of gaming’s most enigmatic individuals. The apparent “employer” of Dr. Gordon Freeman, he is always watching the Half-Life hero’s adventures from a distance, always just out of reach, before arriving at the critical moment to meddle in the physicist’s affairs. He also looks like David Bowie.

While the G-Man lacks Bowie’s blonde hair, we would be wrong to not bring up the fact he looks very much like Bowie did in the movie Absolute Beginners. The similar hairstyle and near-identical clothing is enough to convince me that Gordon Freeman’s mysterious string-puller has modeled himself after Britain’s glamtastic songsmith. I can’t believe you’re still reading this.

Zidane Tribal is something of an anomoly among Final Fantasy heroes. First of all. he’s actually happy, and not the whining, moaning, prissy bitch that Square Enix consistently fawns over. He also looks like David Bowie.

Kane is a general of the Runefaust army, and you know he’s an antagonist because you don’t call join an organization called Runefaust and expect to be fighting for the good guys. A noble fighter but also incredibly merciless. He also looks like David Bowie.

Topher directed me toward this one, and I simply had to include this terrifyingly uncanny resemblance to David Bowie in his finest role — the Goblin King Jareth from Jim Henson’s The Labyrinth. So far, we have no photographic evidence of Kane’s tights, so we can’t see if he also share’s Bowie’s threateningly gargantuan wad. I’d like to think nobody can quite match the Duke in that department, though. 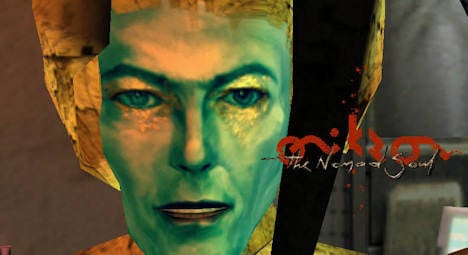 Boz
From: Omikron: The Nomad Soul
Resembles: David Bowie as he might look in a videogame