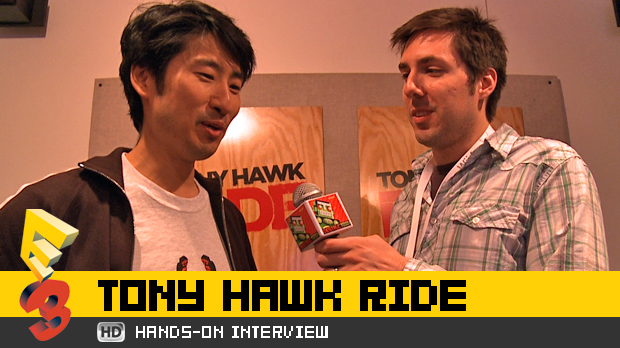 Having seen it behind-closed-doors a few months prior to E3, I was really looking forward to getting my feet on Robomodo’s Tony Hawk Ride when I hit the Los Angeles Convention Center a few weeks back.

Designed entirely around a board peripheral, Ride is unique in that it eschews the traditional controller entirely. It may be one of the first videogames to truly replicate the real-life experience its based on. Which may be why I was absolutely terrible at it in my first few tries on one of Ride‘s practice/tutorial areas. Getting accustomed to standing on the board and finding my balance was a bit of a challenge.

My lack of real-world skateboarding knowledge made the controller-to-board transition more difficult than, say, the guitar-to-plastic guitar transition of Guitar Hero; as a self taught guitar player, the frets and neck instantly felt natural (albeit slightly alien at first). The board is unknown territory for me, and for many gamers, I’m sure. But it might have just been me; many people I talked to at E3 picked up on the game’s controls almost instantly.

When the game ships later this year, I vow that I will “get it,” no matter how worn out my legs become. Yes, Tony Hawk Ride is one hell of a work out.

Robomodo’s President Josh Tsui took time to chat with us about Tony Hawk Ride, to show us the final board peripheral, and revealed that players would encounter a big robot towards the game’s finale. Hit the jump to get a look at the board, the game, and more.

[Want to see our original videos a little bit earlier than they go live on our site? Subscribe to the Destructoid on YouTube!]