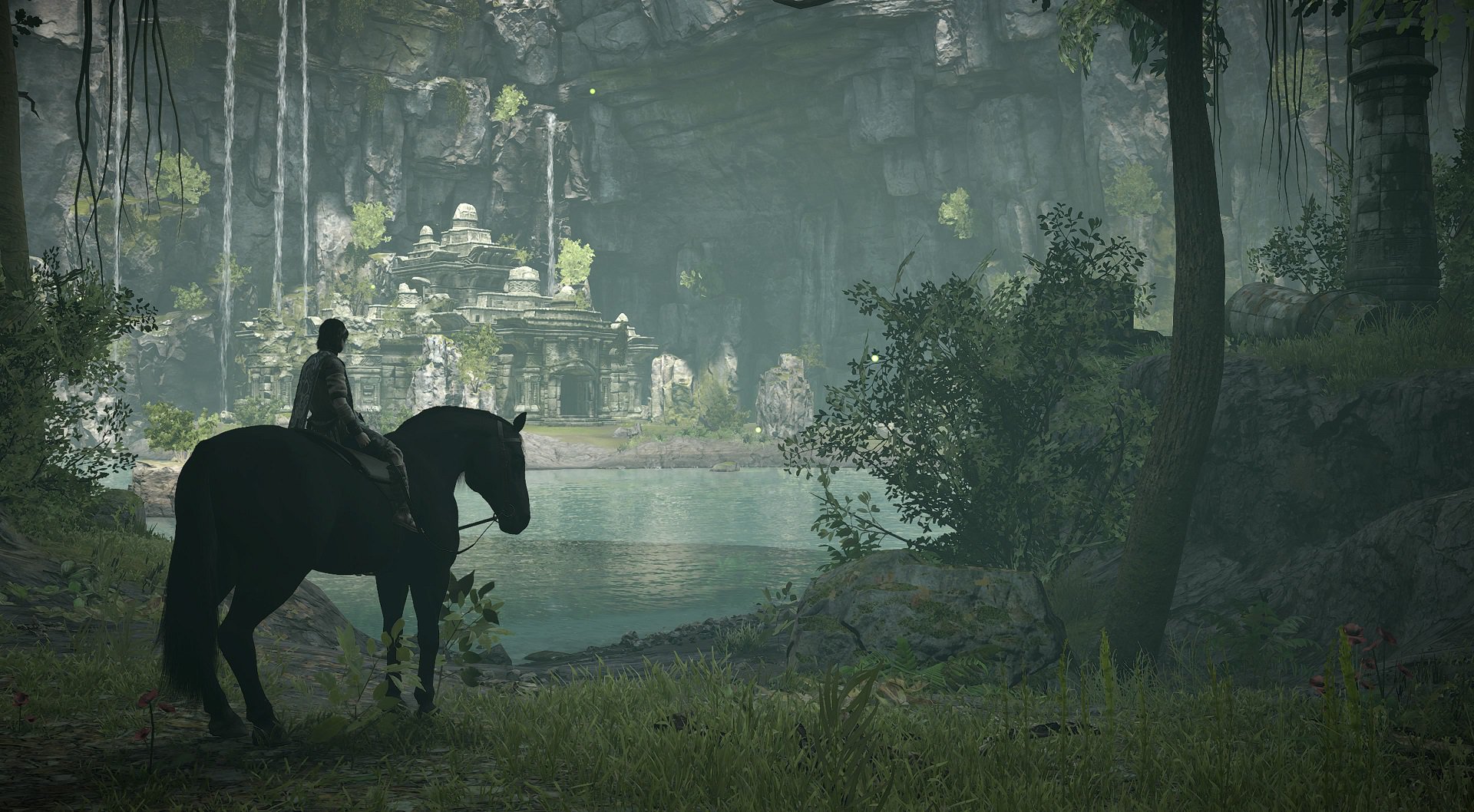 I blame everyone but myself

Here’s a funny thing about covering games: you either play a lot of them or you don’t play enough of them and either way, everything blurs together. Every week, dozens — if not hundreds — of new games come out. Most of them aren’t anything special. Some of them are kind of interesting. And a select few are actually Great Games. Keeping track of the year’s releases is impossible. I don’t know how anyone can do it.

Now that the perfunctory lede is out of the way, allow me to say one thing: Holy shit, I forgot about a lot of games this year. Here’s a self-indulgent post about all of the video games that came out in 2018, ranked by my difficulty remembering them.

According to my Steam library, I played Kingdom Come: Deliverance for 18 hours back in March. For a game supposedly committed to historical accuracy—with magic, game-saving alcohol nonetheless—to be mostly forgotten from modern role-playing game history is delightfully ironic.

“Warhorse Studios took a big risk with this game and hopefully in the long run the technical issues can be addressed, because as of right now, they prevent Deliverance from reaching greatness. If you can climb over the mountain of jank and poor optimization then you’ll be in for an incredibly authentic experience, that when it works, truly puts role-playing front and center in a fabulous way.”

“How much Mega Man 11 is expected to reinvent the wheel is by nature subjective. Despite its reserved approach, it undeniably slots in very nicely with the classic series while bringing our old friend into a new era.“

Octopath Traveler is an old-school RPG on the Nintendo Switch. As best as I can tell, Octopath‘s defining feature is that it has eight playable characters. I’ll chalk this one up to the fact that I don’t own a Switch. I love turn-based RPGs, and I think about them often (weird, I know), but I swear I’ve never heard the words “Octopath” and “Traveler” together until I said them out loud at my desk this afternoon.

“Octopath Traveler is a small triumph in that it mostly delivers on its promise to give us eight stories worth seeing through.”

12. Shadow of the Colossus

I don’t think I’ll ever forget the first time I played Shadow of the Colossus. I did, however, completely forget this beautiful 2018 remake.

Few games are truly breathtaking in the way that Shadow of the Colossus is. It’s a monumental game that I, a colossal idiot, forgot about entirely.

“Team Ico’s Shadow of the Colossus is so impossibly perfect. It’s epic and majestic and emotional and imaginative and breathtaking. There are so many superlative adjectives you could attach. Shadow of the Colossus‘ reputation is as great as some of its tallest colossi. This remake might just help some people see that a little more clearly.”

Call me crazy, but I love Dynasty Warriors games. Even the first game in the series, a chunky-ass fighter, holds a special place in my heart. The franchise’s penchant for repetitive missions and larger-than-life heroes creates for an alluring mix of mindless, yet engrossing digital catnip.

So imagine my surprise when I remembered that a new Dynasty Warriors game released in 2018. I added it to my Steam wishlist at some point, where it’s sitting with “mostly negative” user reviews. I guess this is one time where I really won’t pursue Lu Bu.

“The hack-and-slash moment-to-moment action works in its favor even when transitioning to a new style of play, but Dynasty Warriors 9, like some of its predecessors, is clunky and unwieldy; hampered by the aforementioned bugs and performance problems.”

I’m 90% certain that Unravel Two was announced and released during E3. I was at the show and still have no recollection of Yarny’s return. Sorry, little guy. Hang in there.

“I don’t regret having played [Unravel Two], but I do wish it was better. I love playing co-op games and I was excited by the idea of this minimalist platformer giving me an experience to bond over. Sadly…Unravel Two just doesn’t quite have what it takes to be special.”

9. The Awesome Adventures of Captain Spirit

It’s only after I typed the Unravel Two entry that I remembered The Awesome Adventures of Captain Spirit. Another forgettable E3 announcement. I do, however, recall Destructoid’s managing editor Brett Makedonski telling me he had an appointment to see something from the Life is Strange people. Six months later, I can now confirm this is the game he was talking about.

“The Awesome Adventures of Captain Spirit functionally serves as a playable teaser for the sequel to Life is Strange.”

I’m not even going to pretend like I have something to say about this game. I really don’t know what it is.

“Starlink: Battle for Atlas is a good game that’s robbed of greatness by a lack of ambition and terrible toys-to-life implementation.”

It just hit me that Chasm is a real, playable video game. It’s also a game that was in development for so long that its entire pitch—a metroidvania game with randomized environments—came and went out of style.

“Chasm was worth the wait regardless of its shortcomings. It’s gorgeous, it sounds wondrous, and even though I’m not quite at the point where I can call it a “classic,” it honors the genre.”

I remembered Just Cause 4 existed this morning because an ad popped up on one of my social media feeds. Considering that the game released a few days ago, that’s impressive and depressing.

The only reason I’m writing this post is due to my recent revelation that not only did Far Cry 5 come out this year — I reviewed it. 2018 has been a long and cruel year.

Here’s what I (apparently) said about it:

“Far Cry 5 is a solid first-person shooter set in a vibrant, breathtaking location. It plays well, looks great, and is packed with enough content to keep players invested in Hope County for a good, long while. “

In theory, The Crew 2 is one of the coolest games ever. Pitched as an open-world racer where players could swap between cars, boats, and planes seamlessly, The Crew 2 sounded like a roaring good time. I don’t know if the game delivered on its promise, but I do know that I haven’t heard anyone talk about it in months.

“… The Crew 2 isn’t as big of an upgrade as I would’ve liked. I already have the sense that much like the original game, it’ll take months if not years for the sequel to truly come into its own.”

The joke here writes itself, unfortunately. Extinction released earlier this year to middling reviews and fell by the wayside before anyone could learn its name.

“Extinction is a good blueprint for a more interesting game. I came in excited to slice up some giants, but after the fifth rote exercise I was kind of over it.”

Metal Gear Survive feels like a fever dream. Zombies and crafting and Mother Base, oh my!

But now that Metal Gear Survive is fresh in my mind for the first time since February, I think it’s important to note that there’s nothing more 2018 than having to live in a world where the latest—and most likely, last—Metal Gear game is about building fences around zombies in order to kill them with sharpened sticks.

“… Metal Gear Survive should have been a free-to-play game.”

To be completely honest, I remember Sea of Thieves just fine. I didn’t, however, remember it came out in 2018. It feels as though Rare’s open-ended pirate game was incepted into our minds a decade ago. Sea of Thieves is part of the collective gaming unconscious, and it’s only been available for a few months.

That said, I did play a decent amount of Sea of Thieves earlier this year. It’s one of the most goof-worthy games I’ve ever come across. Drinking digital grog until you barf all over your friends is the apex of video game interactions. Part of me wants to say that on paper, Sea of Thieves is the best game ever. The other part of me thinks that’s an idea Microsoft’s marketing team whispered to me like seven E3s ago.

“The foundation is great. The fundamentals are there. It doesn’t take much imagination to see how this game could blossom into something magnificent. But so long as it’s missing long-term depth and incentives to stick around past the first few weeks, Sea of Thieves will feel like a missed opportunity.”

As an added bonus at the altar of Things We Forgot Happened in 2018, remember when Nintendo sold people a bunch of cardboard? Remember how everyone pretended it was the coolest toy ever for like two weeks? The best part about the Nintendo Labo was the esteemed Japanese video game company releasing a glorified cardboard box on 4/20 and selling it for like eighty bucks.