I moved to a new town today. It was a last-minute decision, and I didn’t even have a place picked out, so it was a little scary. Luckily, a raccoon named Nook showed me some really cheap houses to rent, so I now have a home to call my own (even if it’s really small). I guess Nook owns all the properties here? He seemed friendly enough, I suppose, although he was kind of pushy. Well I’m just glad I have a place to stay. The Gyroid thing out front is kind of weird though… it moves around a lot and surprises me. I don’t know why, but it looks really sad. Anyway… tomorrow is a big day. I should get some sleep.

I met all of my neighbors today. Most of them were really nice; I can already tell that Samson and I are going to be great friends. The eagle was a bit grumpy though, and the cat seemed full of herself. But I’m sure we can get along! A lot of them also have Gyroids in their homes. I tried to ask where they came from, but no one seems to know for sure. Buzz, the grumpy eagle, told me that he sees them in the ground sometimes when it’s raining. Very strange… I’d never even heard of them before moving to this town.

Aside from meeting the neighbors, I also got a job working at the raccoon’s convenience store. So he runs the only store in town and manages all of the properties. It seems like he has as much influence on the town as the mayor. Maybe even more. He gave me a job and a place to live, so I definitely owe the guy. I’m not sure where I would be without him.

It was raining all day today, and guess what I found? As I was running late to work, I tripped over a lump in the ground. It was a Gyroid; Buzz was right! It was making this really weird gurgling sound and moving around every now and then like it was trying to break free of the mud. It had that sad, vacant expression that all the other Gyroids have. For some reason, I felt like I couldn’t just leave it there, so I decided to take it home. 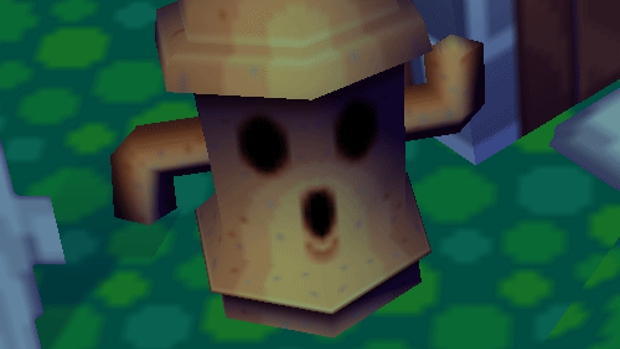 I got a letter in the mail today from Monique, the snooty cat. Apparently she’s moving away soon. I’ve only been in town for about a week, so I didn’t get to know her very well. The other neighbors say that people come and go all the time here, so it’s not really strange for someone to suddenly decide to move out. Well, maybe someone a bit nicer will move into her place.

In other news, that Gyroid I picked up the other day seems to be doing fine. It’s still making that gurgling sound, though. I thought it was just doing that because it was stuck in the mud out in the rain, but it keeps gurgling away every so often. The sound mixed with its expression is a little unsettling. Sometimes it almost feels like it’s trying to tell me something.

Today was the day that Monique was supposed to move out, so I decided to walk over to her place to see if she had left yet, and her house was gone! There was no sign of it anywhere. I got really confused, thinking I had walked to the wrong part of town, but her house definitely used to be right there. I remembered she lived directly south of the post office, so there was no mistake. Did they just bulldoze her house as soon as she left or something? Why would they do that?

I went over to ask Samson what the deal was, and he says this kind of thing happens all the time. Whenever someone decides to move away, he gets a letter from them in the mail, and then a few days later they’ve left town and their house is gone. He thinks it must be Nook’s idea to demolish old houses, since he owns the properties. It seems like a waste of money to build brand new houses for every new neighbor, though. Oh well. It’s not really my problem.

It’s been raining all week. I went to the post office today to deposit my rent and happened upon another Gyroid. Strangely enough, it was lying in the ground right where Monique’s house used to be. This one was writhing around and making a horrible wailing noise, rather than the gurgling sound the other one makes. Wailing with that sad, empty expression… it sent a shiver down my spine. Once again I felt compelled to bring it home with me. I stored it in the basement next to the gurgling one so that I wouldn’t hear the wailing all the time. They only seem to make noises when they see me.

Today was a big day! There was a sign near the museum saying that someone new was moving in soon, so construction on their house was underway. I also got a letter in the mail from Buzz saying he’s about to move away. Things sure do happen quickly in this town. I went to say goodbye to Buzz, since we’ve been on good terms lately, but he seemed really distracted. I guess he has a lot to do to prepare for the move, so I can’t blame him. I’ll miss him, but at least I can look forward to meeting the new neighbor.

It rained again today. I had the sudden urge to go for a walk near where Buzz used to live, and guess what? I found another Gyroid, right where his house used to be. It was just like what happened when Monique moved. This one makes a hollow wooden sound, but it still feels like it’s trying to tell me something. I took it home, of course. I’m starting to get a very weird feeling about these Gyroids, though. I keep finding them whenever someone moves. Could it be a coincidence?

Samson will be moving away soon, according to a letter I got in the mail. I can’t believe he didn’t tell me in person! I went by his house to talk to him about it, but he seemed out of it. It reminded me of how distracted Buzz had been before his big move. This is really sad news; I’m gonna miss that mouse. But it does give me a chance to settle some suspicions I’ve been having. I plan to camp outside Samson’s house to see what happens tonight before the big move.

Oh my god. He killed him. Tom Nook killed Samson.

I was hiding in the trees next to Samson’s house, and around three in the morning, Tom Nook knocked on his door. When Samson opened it, Nook hit him in the head with an axe! I couldn’t see what happened next, because Nook went inside and closed the door. All I could hear was the sound of an axe thumping. Next thing I know, Nook came back outside, dug a hole in the ground, and buried what looked like body parts. Then he stole all the furniture and disassembled the entire house with unbelievable speed and skill, and walked calmly back to his store with all of Samson’s belongings in tow.

My heart was pounding out of my chest as I ran back home. What just happened? I have to get out of town quick. Should I warn the other villagers first?

A hollow wooden sound made me heart skip a beat. I looked in the corner and saw the Gyroid from Buzz’s house, and suddenly it hit me. Nook had buried Samson’s body in the ground outside his house. He must have done the same with everyone else. Is this how Gyroids are created? From the bodies of the dead? But why are they still moving and making sounds? Do they remember? My mind is reeling from everything that has happened tonight…

I must have passed out last night. I awoke to someone knocking on my door, and got up and answered it without thinking. It was Rasher, the new neighbor. He said he got a letter from me in the mail telling him I was moving soon. Was I being pranked? It took a moment for his words to register, but suddenly everything made sense. I didn’t know what to say. I must have shrugged off Rasher in a haze as I stumbled back into my house.

It must have been Nook who sent all those letters. No wonder Samson didn’t tell me he was moving. It wasn’t his choice. Tom Nook chooses who comes and goes in this town. And I’m the next to go. 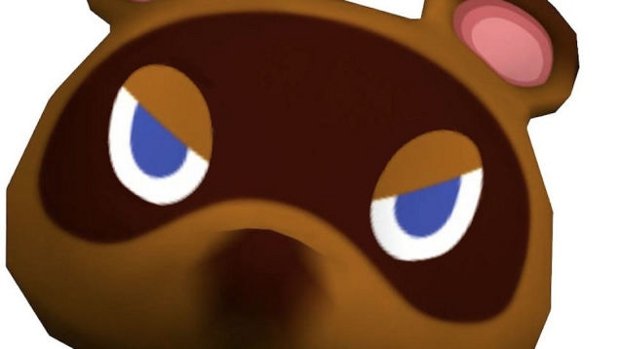