It’s all about precedent

After declaring a strike of video game voice actors this past Thursday, acting guild SAG-AFTRA commenced with their first picket, marching outside the Electronic Arts offices in Playa Vista, CA. About an hour later, the collective group of video game companies and production houses negotiating with SAG-AFTRA held a press conference to discuss the union’s demands. Destructoid spent time speaking with both sides of the conflict in the hopes of trying to figure out how this strike came to be, and what needs to happen in order for it to end.

To directly quote my previous article on the negotiation, SAG-AFTRA is “looking for guaranteed stunt coordinators at motion capture sessions, hazard pay and shorter shifts for intense recording sessions, information about the project once the voice actor has been booked, and a choice between higher upfront payments or post-release royalties based on sales.”

The union held the party line during the picket, balancing their concerns between respect and money. “You don’t pay, they can’t play!” and “Battle cry! On strike! Creature noises! On Strike! Death screams! On strike!” were two frequent chants busted out at the picket line. Their refrain of “LA is a union town!” was accurate — even if you don’t have any experience in the union-dominated film industry, you could clearly see members from both the local Teamster’s and Musician’s union backing up the SAG protestors.

It was certainly more peaceful than you’d expect from a public protest, very much in step with the oddly respectful tone the strike has carried thus far. The union referred to the games industry as their “partners” during their roundtable, and the video game company press conference regularly put over the skills and talents associated with union voice actors. It was loud, but nobody seemed inclined towards violence. The LAPD had a presence during the picket, but the attending officer said he was just there to “keep the peace.” After 20 years on the force, with more than a handful looking after labor assemblies, he claimed he could tell the protest wasn’t about to go sideways. “This isn’t going to be one of those ‘rage against the machine’ type things,” the officer said.

“I remember those,” said another on-duty police officer. “I was there with you!” 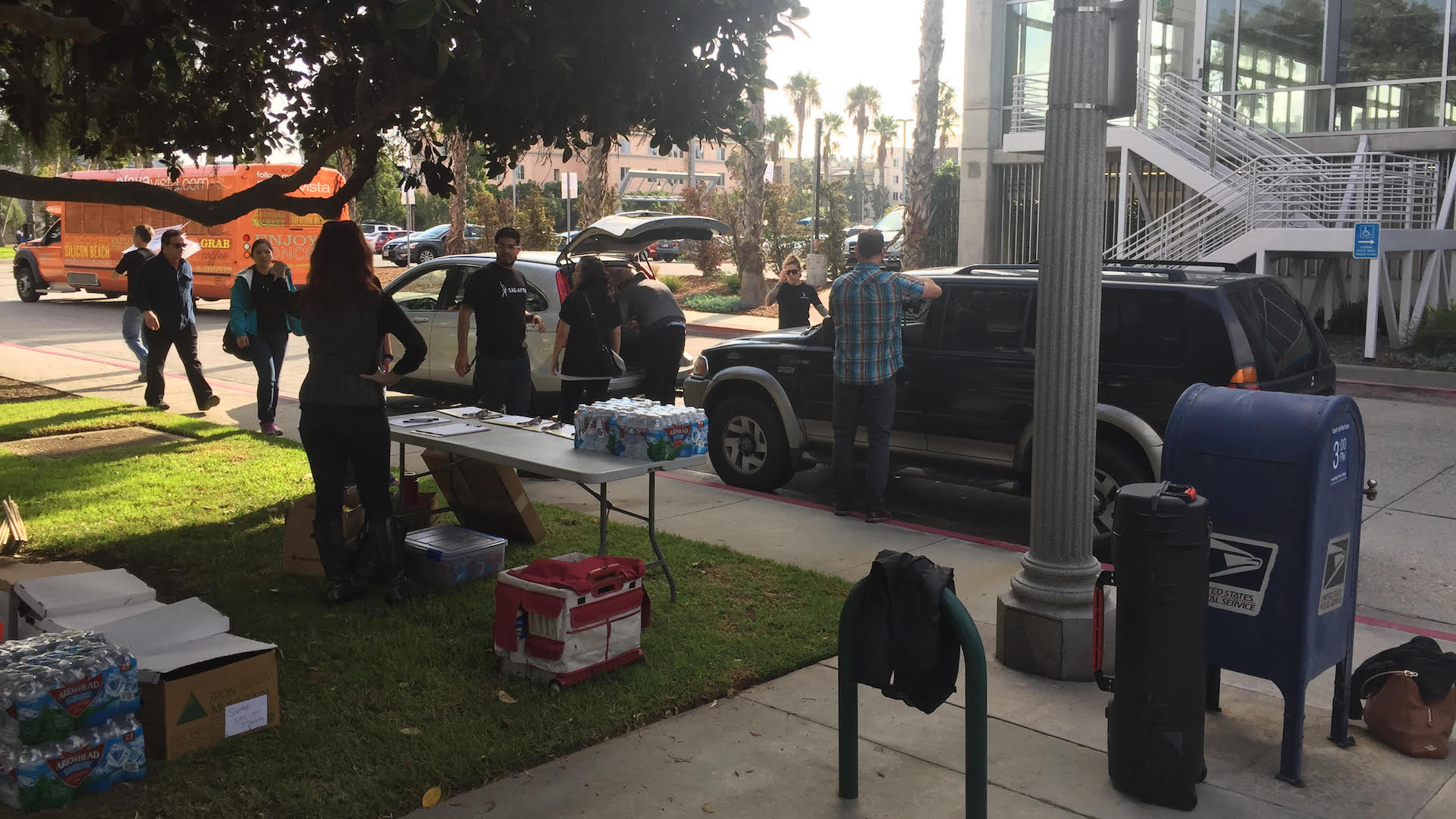 After an hour of observation, I drove across town to the law offices of Barnes & Thornburg to meet with Scott Witlin, the lead negotiator representing the video game companies. In the hopes of countering SAG-AFTRA’s claims, he released multiple documents to the attending press, including the proposal sent by the video game companies to the union the day before the strike. (You can read those documents here, in their entirety)

The documents helped illuminate the “transparency” clause. The clause, which demands that voice actors are told the name of the project, has been particularly contentious among video game developers. Voice actors have a reputation for leaking unannounced video games, to the point where trawling LinkedIn for game announcements is a fairly common part of this job.

During last Friday’s roundtable, the assembled voice actors told us that the transparency clause was necessary for actors who would prefer to turn down roles that involve potentially offensive content, like racial slurs. At today’s picket, I asked SAG-AFTRA president Gabrielle Carteris if a transparency clause that provided everything about the role aside from the actual title of the game (content of role, whether it requires stunts, the game’s genre, and the code name for the project) would be a possible compromise. “[That offer] was not put on the table,” Carteris said. “If that was on the table, then we could have a conversation.”

According to the documents provided by Witlin, that exact offer was on the table. To quote the documents given to Destructoid: “To the extent known at the time of the booking, such description should include the code name of the project, whether the actor is being asked to reprise a role, the description of genre, length of Performer’s role, use of unusual terminology, use of profanity, content of sexual or violent nature, racial slurs, whether stunts will be required, whether memorization is required, and whether cue cards or other prompting devices will be used.” We’ve asked SAG-AFTRA for comment, and will update the story as necessary.

The proposed document also includes a proposal for split sessions in the event of “vocally challenging” recording sessions without additional hazard pay, and contains an agreement on the stunt coordinators clause. Specifically, SAG-AFTRA agreed to “refer the issue of stunt coordination to a Cooperative Committee” — a committee mentioned in the agreement designed to foster “proactive cooperation” between both parties, even after the negotiation closes. 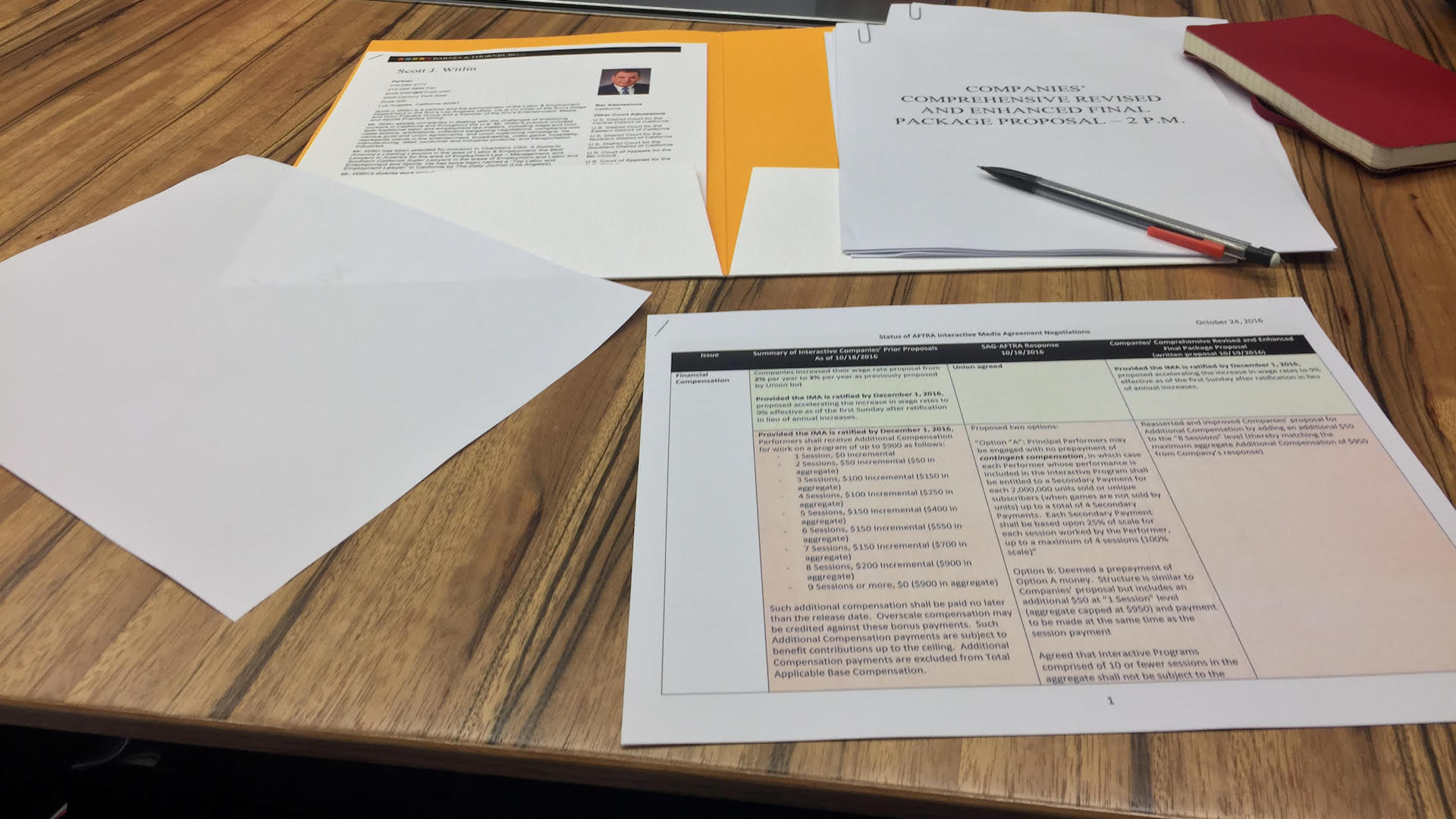 During the conference, Witlin claims that SAG-AFTRA did not give the companies’ proposal enough time before taking a strike vote. “[SAG-AFTRA] called for a strike very shortly after our second negotiation [in 2015],” Witlin said. “We made a proposal on July 26. Before we sat down, they announced a strike. We hadn’t sat down with them [since July.]” He also insisted that SAG-AFTRA should have put the companies’ proposal to a community vote. SAG-AFTRA disagrees, citing an overwhelmingly positive vote as their reasoning behind the appointed interactive committee.

He also spoke on the residuals clause — the biggest point of contention between the video game companies and SAG-AFTRA. For those who are just tuning in, SAG-AFTRA wants producers to be able to choose between “a secondary payment for each 2 million units sold or unique subscribers, up to a total of 4 secondary payments” or “prepayments of contingent compensation, in which case no [residuals] shall be due.”

The companies are okay with the “prepayments” condition, as long as it’s referred to as “additional compensation” and the residuals clause is taken off the table. According to Witlin, voice actors don’t move copies in the same way movie stars do. “The biggest game of the year is Pokémon Go, and I don’t think any actor is selling that,” he says. There’s also the issue of precedent, so the companies can keep “some level of consistency between how [they] pay the people who work on games.” Witlin claims that developers don’t make any kind of post-release money on games — which is not true, since Metacritic bonuses often exist in the industry. Many also suspect the lack of residuals in the contract will keep developers from getting any bright ideas, either about specific residual clauses or about unionizing as a whole.

The final proposal, sent at 10:00 PM on October 18, expires in December. If the strike continues into the holiday season, a new agreement will have to be ratified. We’ll upload the relevant documents tomorrow, once I get my scanner working.