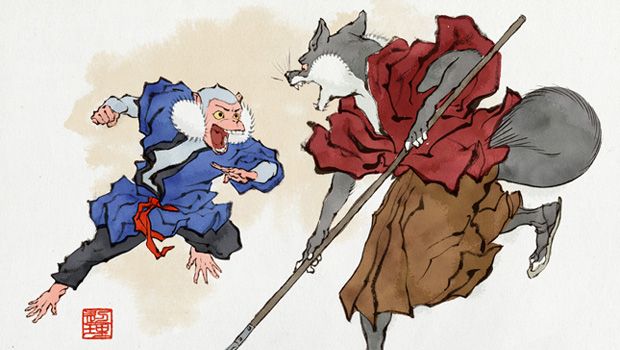 Kickstarter campaign helps both the game and the Japanese art community

Jed’s now taking his talents to the next level by developing a game using the same distinctive ukiyo-e look. Edo Superstar is a fighting game for iOS and Android devices that has been infused with some light role-playing elements. Instead of virtual buttons (because f*ck that noise), the actions you perform will be determined by how you tap or swipe the screen, and to target a specific part of the enemy, simply touch that region of his body.

Another Kickstarter has been launched for Edo Superstar, running through September 5 with a goal of $65K. Rewards include woodblock prints of the main character, Masaru, which I have added to the gallery below. These are once again carved by David Bull, whose current woodblock studio was almost entirely funded by the previous Kickstarter. A portion of the current campaign’s earnings will go towards further supporting his studio and in turn the Japanese woodblock community; if you won’t donate for the game, do it for the sake of kickass art.

I will be receiving a demo of the game in the near future, so expect some early impressions soon. In the meantime, check a sample from the soundtrack below.