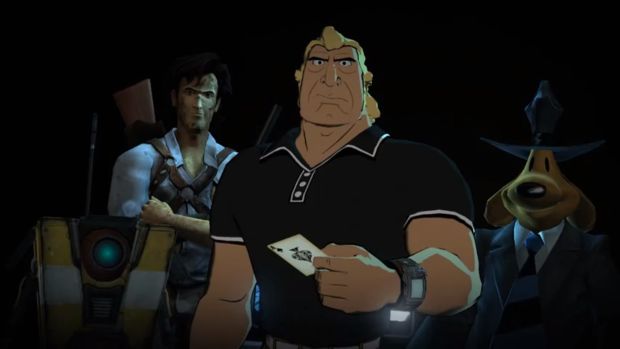 Someone make this happen!

Doc Hammer and Jackson Publick, creators of The Venture Bros. series, gave their usual unprepared Q&A panel at San Diego Comic-Con this year. At the 15:00 mark here, a fan asked the duo of the possibility of a full on Venture Bros. videogame after getting taste of Brock Samson in Telltale’s Poker Night 2.

“One game company would have to come to us and go ‘Hey we want to [make a game].’ Like nobodies ever brought that up ever,” Jackson stated at the panel.

From there Doc Hammer went on a rant about how he feels people think they’re some kind of big company that can easily make a game or movie. And then he started talking about mopeds for some reason, and started reminiscing about Grand Theft Auto: Vice City.

“Rockstar Games would have to go ‘you want to make a Venture Bros. game?’ and Jackson would go ‘NOW!’ That’s how it works,” Doc said. And then he had a revelation about how cool it would be for Brock to go around killing hookers in said game.

So yeah, evidently no one has ever approached them with a full game idea. A Telltale made Venture Bros. game would be rather fun, wouldn’t it?