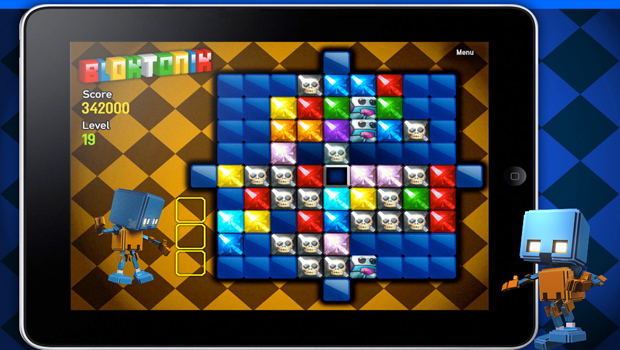 Gaijin Games (and their partner Robotube Games) have popped their claws and submerged them deep into the guts and meats of the iPad. After this, I don’t think there is any turning back. Their fury has now been unleashed, and they absolutely won’t stop the killing until every soldier on the battlefield is left dead or dying.

See those little colored blocks up there? They’re all dying, except for the ones that you don’t see, because those are the blocks that are already dead.

Play Bloktonik if you want to on the iPad. It’s fun to play, much easier than the Bit.Trip titles that Gaijin Games is known for, but still challenging in its own right. In true Gaijin style, Bloktonik has a well-written soundtrack, crafted by chiptune legend Bit Shifter (also known for the Bit.Trip games) and house music hotass Jimpster (from the UK!).

You also get a cute little dancing robot that will f*ck you up with his skinny magic, so that’s a thing. iPad people, play this game and tell me if you like it or not please!