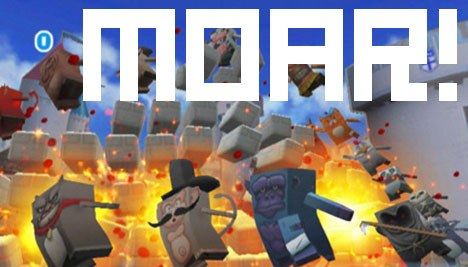 Variety — fast becoming the hottest source for videogame industry news and gossip since Surfer Girl — is reporting that Electronic Arts has shut down its “Blueprint” division.

Let the head-scratching commence, as EA has never officially acknowledged this Blurprint division exists. According to Variety, Blueprint’s “mission was to change the development process so that individuals or small teams could work together from disparate locations without necessarily being employed at an EA studio.”

Sounds good, but at this point it might not matter. According to Variety‘s source, it’s been quietly killed off, with former members of the team either having quit, been re-allocated to other projects or laid off.

But the spirit of Blueprint is apparently still alive, and the good news is a development team working for different locations are hard at work at Boom Blox 2. Yes, the sequel to the Steven Spielberg-branded Wii title of absolute awesome.

No details on what console or consoles it will appear on (will it be Wii-only?), but just the idea of a Boom Blox sequel makes us want to knock things over. And that’s a good thing.